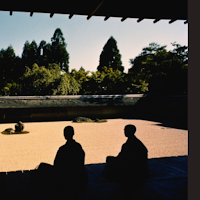 
Do not remain where Buddha is; if you do horns will grow on your head.
Run quickly past the place where there is no Buddha, if not, weeds will grow like a jungle.
Even if you are entirely naked and absolutely bare, and the unhindered interpenetration of mind and circumstances is attained, you still cannot avoid resembling the fool who watched the tree stump to catch a hare.
Now tell me, what are you do do in order to be free from these faults?
See the following.


Who speaks from the first, who from the second principle?
Head number one or number two --
Dragons do not lie in puddles;
A reclining dragon does not look to still water.
Where dragons lurk,
In the negation, waves settle wit the moon;
Waves arise when no wind blows.
In the affirmation, waves rise without wind.
Oh! you Ryo Zen monk,
Zennist Changqing, Zennist Changquing --
You've bruised your head on the Dragon Gate.
You've failed to pass the dragon gate.