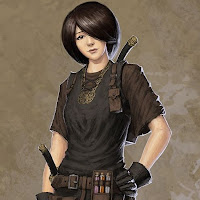 
When the wheel of activity turns, the wisdom eye is still bewildered.
When the jewel mirror opens, not the tiniest speck of dust adheres.
When the fist opens, nothing drops to the ground.
Being in accord with things, one knows the right moment.
When two swords cross, how will they interplay?[1]

[6] Or "I thought I was like Houbai the crook: you're like Houhei, even worse!" (Cleary); "Yunmen admitted, 'Instead of Kohaku, you're really Kohoku'" (Wick). Sato's note: Marquis White and Marquise Black are noted thieves in Chinese folklore. Marquise Black, a female thief, seems to have been the cleverer of the two: One day Marquis White saw a woman looking down into a deep well, crying. He asked her what had happened. She said, “I dropped my priceless neckless into the well, and I can’t get it back.” Marquis White, telling her her he would get it for her, took off his clothes and jumped into the well. He thought: When he finds the neckless, he will steal it, while he tells the woman, “I am sorry, I couldn’t find it.” The moment he jumped into in the well, however, the woman took all his clothes and disappeared. The woman was Marquise Black.

Bowstring and arrow-notch interlock,
The net's jeweled knots reflect each other.

Jewels in the net face each other:
A hundred bull's-eyes shot with not an arrow lost

Shooting one hundred percent bullseyes, no arrows are wasted;
Myriad shapes are perceived with ray after ray unhindered.

Unifying all the various reflections, each light is without impediment
Obtaining the dharani of words, dwelling in the samadhi of play.

Attaining total mastery of words and phrases,
Dwelling in the meditation of roaming at play:
How subtle it is! The seeming and the real intermingled.

Subtle is the interplay therein of relative and complete --
How surely it's thus! Everywhere to be oneself.

It is necessary to be like this, free in all ways.


Yunmen's question is like crashing lightning in a clear sky; Yuezhou's answer is like rolling thunder on dry ground. When they both let go and both gather in, then you see there is a head, there is a tail; this is why none but a Chan monk would know, none but an adept could see. The question is in the answer, the answer is in the question.
[6] Some books say, "I'm already Houbai; you're even Houhei." What it means is 'even worse.'


The dialog here -- as in the 'Related Tale' -- is very subtle. They don't hold onto anything, nor leave any traces.
[2] An odd way to begin. When I was attending Maezumi, he would often look at me and say, "Tell me!" I'd say, "Sure, Roshi, I'll tell you. What do you want me to tell you?" "Tell me!" he'd shout again! At the time, I completely missed it.
[3] Can be understood as asking whether Yunmen has had enlightenment.
[4] I.e., "If I say I have, then it's already passed." As soon as you say, "I'm here now," you're no longer here now. That moment is already passed. So where is now? As soon as you say it, you're too late. That bus has pulled out of the station.
[5] A response like this, in one way, doesn't commit you to anything but, at the same time, it's communicating something very significant. If you are really open, a response like that might make you look at what you just said.
[6] Kohaku literally means "white-head" and Kohoku means "black-head." Yunmen is essentially laughing, "I thought I was conning you, but really you are conning me" or maybe, "I thought I left no traces, but you wiped up my mess." Yunmen is giving a response without giving anything away, without leaving any traces. How can you really reach this place where you leave no traces.
Chant without using your voice, play instruments without using your hands. If you can do that, then everything will be naturally harmonious. That's part of the meaning of this koan.
We put on many false identities. In one position, we're one person, in another position, we're somebody else. So who are we really? How can we truly be who we are everywhere, throughout space and time? The challenge is to see through all the masks and personae. This koan calls on us to reveal a deeper understanding after we've penetrated all the superficial layers of understanding.


Yunmen was Yuezhou's disciple and reportedly served as his attendant for nine years. Their relation here is that between master and disciple, with Yunmen the younger of the two.
[2] An interesting beginning. It’s rather strange to ask for an answer without having posed a question. In the essential world there is no asking or answering. There is nothing to ask, and nothing to answer. Of course, both of them are aware of this from the very start. To pose a question when there is nothing to ask from the very beginning is like a scratch on a perfect surface, so Yunmen doesn’t say anything. Instead he says, “May I ask for your answer?” But if the other party were now to answer, that too would be a scratch.
[3] Yuezhou seems to be musing to himself and saying, “Have you ever been to meet me before?” It could have such a meaning. But that is just
the surface meaning. Actually “this old monk” means the true self. It is pointing to the essential world. “I wonder if you’ve met that old monk or not,” he seems to say. It’s a probing thrust. Instead of answering, he sends out his own question. But in questioning, he’s at the same time providing an answer. The answer is right in the question. It’s his answer to Yunmen's initial thrust. If Yunmen were now to say, “I have reached the old monk” in the sense of having realized his true self, it would mean he said he realized kensho. But is there such a thing as kensho from an essential point of view? After all, it’s simply seeing what was there from the very start. There’s certainly nothing in particular to talk about. Although both of them have deeply realized the true fact, they have both completely forgotten it and become their completely natural, original selves.
[4] Yunmen seems to be saying, “Well in that case, I guess I’m a little late with my greetings.” You have to be able to savor and appreciate what’s going on here when Yunmen speaks like he does.
[5] What is Yuezhou saying? At this point, you no longer know what is being asked and what is being said.
[6] In so many words he is saying: Here I was thinking I was quite a fellow, but you did me one better! I thought I was quite a thief, but you’re a great thief and far superior to me.
Although they might not seem to be saying much, this is actually a very deep koan. The more you delve into it, the more there is to savor and appreciate.


The Absolute Is Not Awareness

An assemblage of African
and Egyptian figurines
stands on Freud's desk
facing his empty chair.
Ash from a final cigar
quivers in the ashtray.
The appointment book is closed.
No footsteps in the hallway.

Posted by Meredith Garmon at 11:20