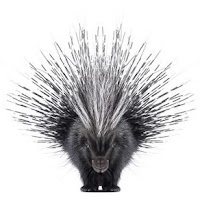 Disciple Porcupine fails as master Raven did. How many different ways do they think there are to call a stick a stick?


That evening Raven took her perch and said to the assembly, "Grandma came to see me today. She held out her stick and asked me what it was. I went to take it in my talons, but she pulled it away and said, 'It's mine. You can't have it.' How would you respond if she asked you what it is?"
The assembly was silent. Porcupine curled up and raised his spines.
Raven said, "Can't have that, either."


Standing, sitting, lying, walking
Amid the colors, shapes, sounds, smells,
The feels of things,
A kind of Heisenberg Principle
Slips between naming and having.
What is named is ungraspable.
What is grasped is unnameable.
God's dice rolling always
Everywhere.

Posted by Meredith Garmon at 09:57