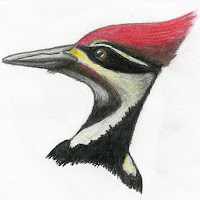 Appropriate action in every situation -- sometimes involves rules, sometimes not.


Woodpecker flew over to Vinecot, and there was the stick leaning against the corner of the porch. She called out, "Hello! Hello!"
Grandma came to the door.
Woodpecker said, "Is that your stick?"
Grandma said, "You can take it away with you if you like."
Woodpecker said, "I heard that you wouldn't give it to Raven."
Grandma said, "I still wouldn't."
Woodpecker then flew back to Raven and said, "I went to see Grandma and she offered to let me have her stick. I told her I had heard that she wouldn't give it to you, and she said she still wouldn't. Surely she's not playing favorites."
Raven said, "For pine nuts go to the pine tree."


Reliability
Of, say, things planted growing, usually,
When conditions and seed are right for each other,
Which isn't so hard to arrange,
Surprises, edges me into believing
In consistency, and the possibility of justice:
That there are like cases that may be treated alike.

Then: the shift of pattern,
The randomness of events and outcomes,
The course reversals called inexplicable
because we forget the inexplicability of courses stayed,
Come as a wonderment.

Each surprise sets up the other,
like players of a comedy team.

Posted by Meredith Garmon at 19:50