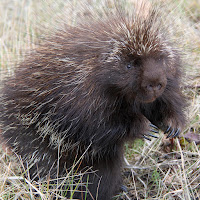 Our story began when Raven visited Jackrabbit Roshi and asked: "I hear that Buddha Macaw looked up from the branch of her Jobo tree and saw the morning star and announced her realization. I get the feeling that something is missing from the story. What happened when she saw the star?" Jackrabbit answered: "She realized the truth of mutually dependent arising." Raven felt that something was still missing. (Raven #1)

Now we see our friend Porcupine beginning to show signs of moving into an assistant teacher role. Thank you, Porcupine, for your practice and your wisdom!

There is no such thing as a complete explanation. Explanations are words, and words, even if they go on and on for many volumes, always leave out something. Words also latch on to some aspect and make it prevalent. Place not your faith in explanations! Consider this bit of dialog from Ring Lardner:

"Shut up" may be the best explanation. Explanatory words might add perspective, but, ultimately, the oneness and emptiness of reality is perspectiveless.


A robin, the lifeless form of,
Lies by the path, her talons
Curve around air.
To say what is missing is not hard:
Her motion, her song, her concerns.

To detect the prevailing presence of same,
In the gray and ruddy feathers:
This, too, is not difficult.
Less often said, maybe.

I bend and take the body up,
Carry it to the covering of underbrush,
Stand over the grave
In wonder of the goneness
And equally of the
undepartability.

Posted by Meredith Garmon at 17:25