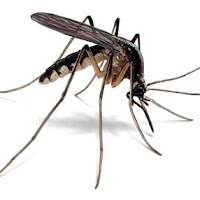 An exercise: Imagine a mild, bearable discomfort -- like a mosquito biting, say, or waiting for a bus in the cold when you didn't wear a heavy enough coat. Now reflect on the beauty and wonder of that very moment of discomfort. Love the annoyance. All the mystery of the universe is right there in that moment. Don't you feel it?

With the mosquito's proboscis, Raven moved from "thought I understood" to "at last able to appreciate the mystery." It's not that she hadn't understood before. It's that appreciating the mystery is different from understanding a line.


​One night after a meeting, the Tallspruce community lingered in the dark under the stars, and Raven reminisced about her time with Brown Bear.
"I remember," she said, "one day when I wasn't feeling well, and Brown Bear Roshi had me rest in her cave. Somehow it was a special gathering place for mosquitoes. One of them suspended herself before my face. She was almost not there -- so fragile, her long threadlike legs hanging down motionless. I marveled that she was a living being with appetites and incentive, yet hardly more than gossamer."
Raven continued, "When we chant the Heart Sutra, we recite, 'Form is no other than emptiness; emptiness no other than form.' Sometime earlier, when I was looking up at the night sky, I thought I understood that line, but when I was resting in Brown Bear's lair and I felt that mosquito sink her long proboscis in my face, I was at last able to appreciate the mystery."


The package deal of appetites and incentive --
Hunger-satiation, fear-security,
Lust-orgasm -- arrives as advertised,
Home delivered, and throughout the neighborhood,
Sensations of
Mosquito bites, tea, sky, paper cuts
Thrown in, no extra charge.
The promise of essence, independent and abiding,
is never kept, nor was ever made.
Read again the fine print,
The fine, fine print.

Posted by Meredith Garmon at 18:02