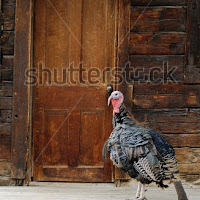 
"If you follow your bliss, you put yourself on a kind of track that has been there all the while, waiting for you, and the life that you ought to be living is the one you are living. Wherever you are — if you are following your bliss, you are enjoying that refreshment, that life within you, all the time."

Your true "employers" -- the true bosses of your life, in whose service lies your authentic vocation -- is that which is alive in you, simultaneously universal and unique.

Think of something you do -- something that is both as ordinary and as magnificently special as a robin singing in an oak tree. That's it. That's your bliss. It might not have seemed like much, but that's it. Follow it.


Grandma was chatting with Turkey at Vinecot, when Granddaughter made a surprise visit. That evening after supper, when they had caught up with each other's news, Granddaughter said, "Now that I've finished school, I don't know what I will do next."
Grandma said, "Follow your bliss."
Granddaughter said, "That sounds selfish."
Grandma said, "Your employers don't all have desks and files."
Next evening, Turkey asked Raven about Grandma's advice.
Raven said, "It's like Brown Bear said: 'The Robin sings in the oak tree; the finch sings in the madrone.'" [See Raven 5]
Turkey did not respond.
Woodpecker asked, "Aren't they distractions?"
Raven asked, "From what?"
Turkey seemed to come to herself, and gobbled.
Raven said, "Like that."


What makes a distraction?
The brain doing something,
Then thinking it shouldn't have?
I'm not saying your inner moralizer
Might not have a point,
just that maybe there's
Another angle.
What the brain did,
It did pursuing
its need and bliss.
Distraction isn't following
the wrong thing
But following
At a distance.

Posted by Meredith Garmon at 12:50