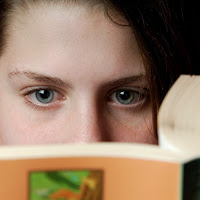 Your own life also communicates in this way.


Granddaughter asked Grandma, "I've heard that some Zen teachers advise their students not to read. What is your opinion?"
Grandma said, "Read."
Granddaughter asked, "What should I read?"
Grandma said, "Watch for your name."
Turkey told Raven about this.
Raven asked, "How is that for you?"
Turkey said, "Dunno, Roshi. Books don't mean much to me."
Raven said, "You have your own works."


I found my name in Plato, for instance,
and in Rorty, Wittgenstein, Nussbaum, Dickens, Austen, Wendell Berry, and Garry Trudeau --
in Hesse, Laozi, Camus, The Amazing Spider-Man, and Arundhati Roy --
in Thurber, Thoreau, Dillard, Vonnegut, Brautigan, and the New York Times, for instance,
and in Hongzhi, Dogen, Dworkin (both Ronald and Andrea), Tom (both Robbins and Wolfe), and Irving (John, not Washington) --
in Woolf and Tolkien and Twain and Chas Addams and James Luther Adams,
For instance.
My name was on every page.
Because I wrote it there myself?
Possibly, but
The handwriting doesn't look like mine.

Posted by Meredith Garmon at 16:56