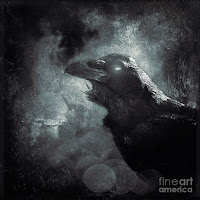 
"be more of an artist, and ‘load every rift’ of your subject with ore. The thought of such discipline must fall like cold chains upon you, who perhaps never sat with your wings furl’d for six Months together."

"Load every rift of your subject with ore" alludes to a line in Faerie Queene by Edmund Spenser (1552-1599):


"And with riche metall loaded every rifte."

Keats meant that a poem ought to pack every line dense with meaning and layers of nuance. Raven's variation -- "stick kernels in every cranny" -- suggests that a teacher and mentor find teachable moments everywhere and in everything.


Porcupine began special consultations with Raven.
One day he asked, "What is your method?"
Raven said, "Evident."
Porcupine said, "You purvey the obvious?"
Raven said, "Stick kernels in every cranny."


I.
Nature's method is none.
Profligacy is not methodical.
Survival of the fittest
Might be a method if nature
Had a measure of fitness
Other than surviving.
Survival of those that survive
Is not a method.

II.
The stars of Orion know about method, and what is evident.
The broad, slow river knows.
Though there are no crannies, and no kernels with which to fill them,
They are always full.

Posted by Meredith Garmon at 16:53