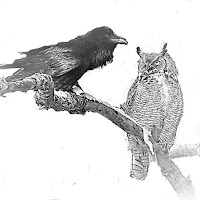 FDR famously told us, "We have nothing to fear but fear itself." But that's a lot to fear! Fear is powerful and not easily subdued.

Alternative translations of the last two lines include Thomas Cleary's: "Where there is fundamentally not attainment, /After all one attains." And Hubert Nearman's: "Since, from the first, there was nothing to realize, /now, being satisfied, I have realized!"


One eye sees the effortlessness,
of mountain, river, hackberry and elm
The other eye sees the minute and vast efforts
of the earth pushing up a mountain,
of water pushing a path around every rise,
of photosynthesizing leaves, nutrient-grabbing roots,
and a trillion busy cells.
Depth perception takes two angles of view.