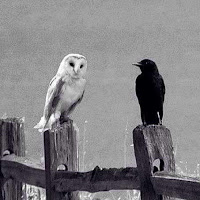 Jackrabbit Roshi was there at the beginning of our adventures with Raven -- in #1, where he put the teaching of mutually dependent arising at the center. Since then, Jackrabbit has only been referred to: in #38, where Raven invites her students to speak up about "anything in our program that troubles you"; -- #70, where Woodpecker asks about reports that Jackrabbit is now putting "just this!" at the center; -- and #86, where Owl asks about Jackrabbit supposedly having said, "the mind has no qualities and its essence is compassion."

Turning points unavoidably arise, if they arise at all, within and out of your own situation. But, as Owl learns, it's no easy thing to be grounded in, and clear about just what your situation is


"During revolutions, scientists see new and different things when looking with familiar instruments in places they have looked before." --Thomas Kuhn

When did it happen? You
Becoming you, I becoming
This.
Is not change, though continuous,
Punctuated?
Were there not moments --
a day, a year, or two --
Of seeing through a new glass,
Just as dark,
maybe,
But that seemed less so?
Were we not given
Glimpses because of which we took
A yellow-woods road that
Made all the difference?
Did we not,
At some identifiable-afterwards time
Turn aside from the task of shoring up the imperium,
And set ourselves instead to construct new forms?
When?
When did it happen?
Might it be happening again?