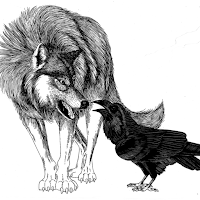 This is Gray Wolf's fourth appearance. She first appeared in #22 where she asked about karma. We didn't see her again until #59 where she remarked that the enlightenment of bushes and grasses didn't "seem so likely somehow." Then, in #75, she asked how to keep the vow to save the many beings.

When practice is one's whole life, what else could there be to want?


Gray Wolf made one her rare visits to the circle, and after a talk by Raven she remarked, "The goal of practice seems to be just more practice."
Raven bobbed her head. "Well?"
Gray Wolf hesitated, and then asked, "So there's no end to it?"
Raven hopped down from her perch to a little hummock beside Gray Wolf, put her beak to Gray Wolf's ear, and murmured, "Thank goodness."

Then, amid the shock, another surprise:
Continuation.
Some this there is,
That doesn't end.