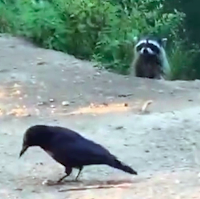 Raccoon, a student of Moose Roshi, makes his third appearance. He first appeared in #93, where Raven asked him what Moose Roshi was teaching lately. "The practice of Zen is the perfection of character," he said.

He also appeared in #98, where he prompted a dissertation from Raven on the relation between everyday life and zazen.

Here, however, his question prompts no answer at all -- or an answer presented as a rebuff.

When Raven looks around, is she facing in or facing out? Does your original face face in or face out?


Raccoon visited again from Cedarford and asked, "Why do some Zen groups sit facing into the circle, and some sit facing out?"
Raven looked around and asked, "Any other questions?"
Raccoon sat back and was silent.

Questions to ask for the sake of the answer:
Which way to Haymarket Street?
Have you seen my keys?
What's the diagnosis, Doc?
There's a going involved.

Other questions might be more for the sake of the question:
What am I aware of?
Who hears?
What is mind?
There's a staying involved.

There are also times I ask,
Keen neither on answer nor on question.
I want to hear your voice responding
And be the one who prompted you.
Why is that?