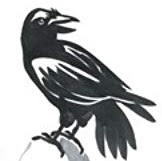 "Some of the Pharisees in the crowd said to him, 'Teacher, order your disciples to stop.'
He answered, 'I tell you, if these were silent, the stones would shout out.'" (Luke 19:39-40)

The stones are shouting in any case. You pour out from everything in the universe, as the whole universe pours out from you. Nothing can be hidden.


We named our car Blue,
and pronouned her,
as one does to recognize a personality,
part intrinsic, part projection,
as personalities are.

We wondered at the borders.
When the CD player stopped working,
Was that Blue? Or just Blue's?
"Where does a personality stop?"
I asked my spouse,
after I'd slid in a CD to no effect.
She turned on the left blinker, slowed for a turn,
and said to the oncoming traffic,
"Nowhere to hide."