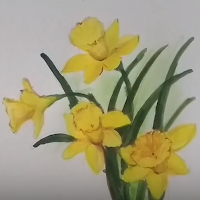 Unable to grasp the many kind explanations Raven has already given, Woodpecker now asks yet another variation on the same question. Raven, whose compassion knows no bounds, patiently explains.


Helping Raven arrange the flowers before a meeting, Woodpecker asked, "What's liberation?"
Raven said, "Another couple of daffodils on this side, I think."
Woodpecker said "You're not answering my question."
Raven said, "Daffodils."


The orange five-ball, rolling across the green felt,
Its vector determined by
angle and magnitude of the force that acted upon it:
So utterly free, so totally liberated.
I, watching, cue stick in hand:
Another matter.