208
Gateless Gate (Mumonkan, Wumenguan) #4
The Barbarian Has No Beard 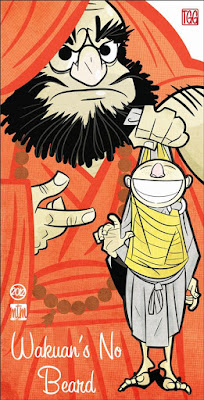 
Huoan said, “Why has the western barbarian no beard?”[1]


If you practice Zen, you must actually practice it. If you become enlightened, it must be the real experience of enlightenment. You see this barbarian once face to face; then for the first time, you will be able to acknowledge him. But if you say that you see him face to face, in that instant there is division into two.


In front of a fool
Do not talk about dreams;[2]
The barbarian has no beard:
It’s adding obscurity to clarity.[3]

An iron tree in bloom;
the rooster lays an egg;
seventy-two years --
the cradle has fallen.

His question is complete because it contains
His utmost statement. It is his own array,
His own pageant and procession and display.

Any answer that begins with "because" won't do. No enough pageant, I would say. Take up this "why." Your insistence upon the question itself will turn your ordinary world on its ear and yu'll be two years old again. You will be "like a fish, like a fool," deep in the question. Settle on Huoan's "why" and remain there. When you are working on Huoan's question, you no longer seek peace or absorption yet you find yourself peacefully absorbed in the question: "Why has the Western Barbarian no beard?" If you see from within the world -- that is, if "you and I" is just a convenient expression and you really know that "I" and "I" (all of them very different) are the true pronouns -- then the way will be clear and you can use dualistic language freely without stumbling. Everything is clear from the beginning. Just as you see, just as you hear. The hedge is full of hibiscus flowers after our recent rains. The thrush sings sharp and clear this cloudy morning. What is all this about beard and no-beard?

Bodhidharma is orinarily used to represent the real self or the essential mind. This self is called a Foreigner because it is unfamiliar to the culturally conditioned mind. To say that the Foreigner has no beard is to say that the real self or essential mind is not identical to the superficial aspects of personality or outward appearance. The question in the koan is deliberately contrived to elicit a certain way of seeing, but to someone who sees only the obvious conundrum, the outward form of the koan causes confusion.

Practice is for fools, but it is very important. People in the world are not fools. They interact with other people, egnage in many tasks, and amid all of these activities, they try to be smart in their manipulations, jealousy, arrogance, and aversion. They are so smart that they wallow in their own vexations. Sitting meditation is an appointment with yourself to be honest with yourself. This honesty is a fool's practice, where you try to put down all of your masks and tricks. Even with your eyes, ears, nose, tongue, body, and mind, you still do not know who you truly are. Between this having and not having: "Who am I?" Your gadgets and toys won't work here in helping you to realize who you are, what you are. You simply have no control of your emotions or thinking. You are constantly blown by the eight winds of pleasure and pain, praise and blame, fame and disrepute, gain and loss. You are a foreigner to yourself; you are that barbarian with no beard. To take this case, "Why does the Barbarian from the west have no beard?" seriously is the same as asking yourself, "Why is it that I have no eyes, ears, nose, tongue, body, and mind?"
Even if you experience oneness, that everything is "just myself," realize that in that oneness there is still a self. This is the Great Self, which must be let go of. You must see the "Barbarian" in person, face-to-face. This means that you must personally realize who you are without disguise.
Please don't be smart and add fuel to the fire by spinning off all kinds of concepts and fantastic notions. Just focus on this "Why" and allow it to percolate, to simmer inside you, until all concepts and delusion subside. And when by chance you feel your beard, you will finally realize that you have none.

One must see Huoan, beardless, looking at a picture of Bodhidharma hanging on the wall, and asking himself, "Why has Bodhidharma no beard?" And then one must become Huoan in front of the picture.
Huoan is saying something fundamental about ourselves and our relation to others. He is urging us to go beyond the view we have of ourselves as separate, alienated things or persons in an uncaring and dead world.
In Zen we speak of the doubt sensation, but perhaps we should speak of the wonder sensation. I wonder! How few of us do in fact wonder, and how much poorer our lives are because we do not, indeed because we cannot, wonder.
"Why?" takes us out of ourselves. It opens up the mind. A child, at least when first asking "why?" is probably experiencing this feeling of wonder to some degree. If the wonder is deep enough, the mind is totally aroused, without resting on anything.
We must not yield to a temptation to make Bodhidharma a symbol for the awakened state and then say that in his awakened state Bodhidharma has no beard, nor has he eyes, ears, nose, tongue, body, or mind. Nor should we look upon the beard as a symbol for defilements that are shed when we attain to our true nature. These observations are not the point of the koan. They require no leap of faith for their sense to be revealed. One must ask who is Bodhidharma, or better still, who is the other?
One must come face to face with the barbarian, and then one actually knows him. But even in talking about coming face to face we have already obscured the clarity; when is one not face to face with Bodhidharma?
There is no easy road through this koan. One must drop all reasoning, all search for verbal and intellectual meaning and, naked, stand before Bodhidharma wondering, "Why has that fellow no beard?"

Why does Bodhidharma, who has a beard, have no beard? You should yourself become Bodhidharma. Then if you have a beard, Bodhidharma has a beard; if you have no beard, then neither has Bodhidharma. But can you say that you are in truth Bodhidharma?
Do not attach yourself to experiences which may prove to have been merely dreams. To draw a distinction between beard and no beard is already straying from the point. Words, concepts, and other inventions of the mind only obscure the truth. Do not cling to shadows, but catch hold of the truth itself.

Bodhidharma not only has no beard, he has no eyes, no nose, no skin, no teeth.
Probably Huoan had shaved that morning, and, rubbing his chin with his hand he might have said, "Well, well, the beard of Bodhidharma is all gone."
Only in the palace of your inner self do you meet Bodhidharma face to face -- nay, you open his eyes, and he smiles with your mouth and all your features. Do not call it realization or enlightenment; such names will spoil your fun. You are the barbarian. You ought to be satisfied with the name.

"Why had Bodhidharma no beard?" -- this short and simple question has the strength and sharpness of a naked dagger thrust at the throat. The word "Why?" in particular is the key to this koan.
For something that definitely is, why does he say it is not? From what standpoint does Huoan insist, "He has no beard," while he actually has one?
Wakuan asks us to cast away all of our dualistic consciousness in this Great Doubt "Why?" In this "Why?" yes and no are to be abandoned; subject and object are to be transcended.
Is there such a distinction of yes and no in the thing itself? Are there such distinctions as big or small, this or that, in the reality of a thing itself? Be the Reality itself. Be the beard itself through and through. At this moment the whole universe is the beard; the whole universe is no-beard. The universe, or the infinite, does not knw the dichotomy of yes-and-no, this-and-that, bieg-and-small.
"Why has the foreigner from the West no beard?" If he has the beard, just with it, as it is, he has no beard. If he has no beard, then just without it, as he is, he has a beard. Such a beard is the true beard that can even bind the whole universe. The one who has this beard is the man of eternal peace.
To know whether the foreigner really has a beard or no beard, one has to grasp Bodhidharma alive with his whole being. To grasp Bodhidharma alive is to be, oneself, Bodhidharma. When he is truly Bodhidharma, he himself is the Truth that transcends being and nonbeing.

The phenomenal Bodhidharma has a beard, but the essential Bodhidharma has no beard. What is this essential nature? Who has it? What is it like? All existence has its essential nature -- every person, every thing, the whole universe. There is no difference between people's essential nature and the essential nature of things and the universe. It is all the same. There is no dualistic opposition in the essential nature, such as subject and object, good and bad, Buddha and ordinary man, enlightenment and delusion.
Just reflect for a moment on your own mind. You cannot tell where your mind is. Some people point to their head, but that is their brain. It is not the mind. Nobody knows where the mind is, but we do know its functions. It sees, it walks, it thinks. The mind of your eeryday life is the entrance to the essence of the vast, limitless universe.
The essential nature and phenomena are one from the very beginning. Thus the Heart Sutra says, "Form is nothing but emptiness; emptiness is nothing but form."
When you touch your beard with your hand, does your mind have a beard? The mind is the agent controlling the movement of your hand. You can see your hand. You can touch your beard. You can recognize everything that is yours -- your fingers, your head, etc. But where is the You itself? You yourself is no other than your mind, and your mind has no beard!
The barbarian has no beard." These words themselves are no other than the beard. You are self-sufficient and complete as you are so long as you have no beard. But if, upon hearing Huoan's words, you use your brains and doubt even a bit, a beard will sprout and your essential clarity will be obscured by it.

OK, look here:
Identity is identity.
Can there be different ways to be identical?
A=A, no doubt.
And there are also truths of the form A=B.
So: nonidentical identity?
So Gottlob Frege puzzled.
"The morning star is the morning star"
seems, shall we say, uninformative, while
"The morning star is the evening star"
was a discovery.
Why has the German philosopher no beard?
I just want to say
We call things the same in various ways.
They are never the same.
We call things different.
They are never different.
Why is that?