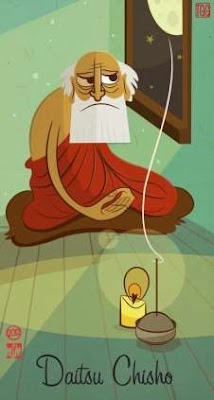 
A monk said to Xingyang Qinrang, "I understand a buddha who lived before recorded history sat in meditation for ten cycles of existence and could not realize the highest truth, and so could not become fully emancipated. How could this be?"[1]
Xingyang replied, "Your question is self-explanatory."[2]
The monk asked, "Since a buddha was meditating, why couldn't he realize buddhahood?"
Xingyang replied, "He was not yet a buddha."[3]


It is better to realize mind than body.
When you realize mind, you need not worry about body.
When body and mind become one, you are free
And desire no praise.

Deaf monk sits beneath a dead branch
Half moon hangs in the sky
In Kenosha, Jacob Blake
Lies in hospital, spine severed
Channel is open for dharma
study if you're interested!

Why am I making no
Progress? Why? WHY?

Yes, yes, of course there's no
Progress to be made.
All things, as they are:
Fully realized.
I know that.
Everybody knows that.
But other than that

Why am I making no progress?

To marry this question,
To wed it and bed it,
Companion it,
Produce issue with it,
Means, as marriages do,
Not being master or slave
And not neglecting.

Posted by Meredith Garmon at 17:21