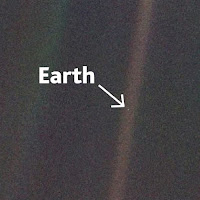 Continuing from the previous segment, in which Porcupine asked whether Zen had a moral basis, we now see Porcupine reflecting on immense vastness. Whatever we can conceive or imagine of the size and multifarious diversity of the world, it is actually much bigger than that -- we are much bigger than that. Also tiny (though I don't think that's why Porcupine wept).