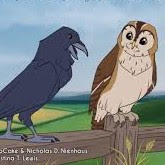 Sixty-one episodes ago, in #59, Gray Wolf asked Brown Bear about dedicating sutras to the enlightenment of bushes and grasses.

It is not difficult to mouth the words, "all things are myself." But do you remember it when asked where the trees are?


One evening Owl said, "When Brown Bear visited us, Gray Wolf asked her about the dedication of our sutras to the enlightenment of bushes and grasses. Brown Bear said, 'They are very patient.' I've been musing about this for a long time, and I still don't know what to make of it."Raven asked, "Where are they?"
Owl said, "Bushes and grasses? All around."
Raven said, "Like the moon and birds."
Owl said, "Stones and clouds."
Raven said, "Very good. Now, where are they?"
Owl hooted.
Raven said, "Yes! Yes! On that path."


The old man in the forest hut,
A dozen kilometers from the nearest road, which is dirt,
And about the same to a power line, or another building,
Lives on nuts and berries, which he cans,
And the occasional package sent by a religious order
To a P.O. box, which he visits when the post office is closed.
Six years without seeing up close a face,
or hearing a voice, of another human.
Beneath the hackberry whose bloom petals mottle his roof
There are no hermits.