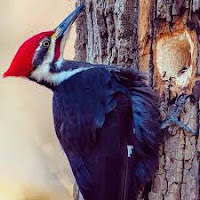 The void is not the void? Try this. Think of something that you imagine to be not a void. A rock, say. A bell, a tree, a person. All of these things are also void -- void, that is, of permanent and independent existence. They are always changing -- becoming what they are not -- and always giving to and taking from the world around them.

"Whoever fights monsters should see to it that in the process ze does not become a monster. And when you look long into an abyss, the abyss also looks into you." -Nietzsche

The abyss looking out from you,
See to that and:
No more monsters to fight.