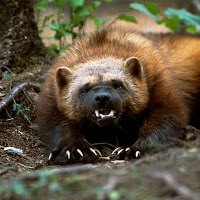 Wolverine spoke up during the question period one evening and said, "I am finally in touch with my essential nature. It has been hidden all this time."
Wolverine said, "It's my basic nature, the source of my inspiration."
Raven said, "My, my."
Wolverine said, "It's beyond all ideas of life and death."
Porcupine said, "More like the train beyond Cedarford."
Mole asked, "What do you mean?"
Porcupine said, "It never seems to break down."
Wolverine put her head on her paws.
Next day, Woodpecker spoke to Owl about this. "I thought Porcupine was bristly toward Wolverine last night," she said.
"Yes, said Owl, "Porcupine was being Procupine. But you know, Wolverine did break down at last."