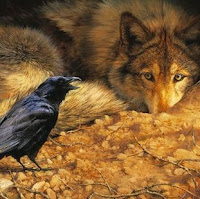 This is Gray Wolf's seventh appearance. She first appeared in #22, where she asked for an explanation of karma. Then, in #59, she didn't think the enlightenment of bushes and grasses was likely. In #75, she asked how she could save the many beings. In #103, she remarked that the goal of practice seemed to be more practice. In #140, Gray Wolf asked, "Why do we always do everything in exactly the same way?" In #144, she said it seemed undignified to bow before the Buddha. Gray Wolf was also mentioned in #120, when Owl said she still didn't know what to make of Brown Bear's answer to Gray Wolf back in #59.

"Dream" may refer to a delusion, or to a hope. Perhaps Raven is referring to the delusion of separation -- the human delusion of being separate from other animals. Or perhaps she's referring to the hope of a more aware and attentive way of living. Which do you say she means? In either case, there's no answering for it.

One evening Gray Wolf Came by after a long absence and asked, "Are the old masters of the past really our own ancestors?"
Raven said, "Most certainly."
Gray Wolf said, "But it seems that they were folks who wore clothes."
Raven said, "I can't answer for the dream."