Raven 170: Talking About It 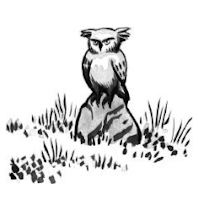 About. See it as an adverb rather than a preposition. We say that we talk about this and that, and it's the object of this preposition that fools us: this or that, as if there were such things. About, the adverb, has no object: we walk about, going here and there. Or, since words are tools, not representations, think of what it would mean to hammer about, or go wrenching about for an afternoon. Suppose talking were like that. Isn't it?

So, then, is Owl's silence indicative of her inability to meet Raven's command? Or is this silence Owl's way of continuing to talk about?