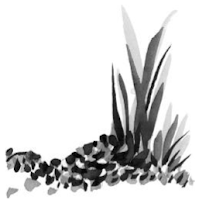 Death has to happen, and we have to mourn when it does. Do we need to blame? Sometimes it's functional. What about blaming (self or others) for blaming?

Badger's little daughter Furry was caught by Cougar and eaten. The Badger family went into mourning, and the community held a memorial service. Folks came forward and offered flowers at the altar and spoke. Cougar did not attend.
While folks were eating grubs and leavings after the service, Mole said to Badger, "I grieve at your loss, and I'm deeply upset with Cougar. To think that a member of our own community could do such a thing."
Badger said, "He didn't know. And I eat baby mice, after all."
Mole said, "Over at the Little Church in the Grotto they say the lion shall lie down with the lamb."
Raven sighed and said, "The raven, too."
Wolverine said, "I need my meat. I can't magine just eating grains and fruits like some of the birds around here."
Raven said, "Bushes and grasses are even slower."