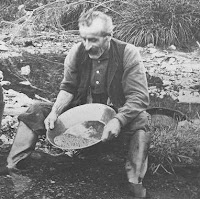 Magpies -- and corvids generally, including ravens -- have a reputation for being attracted to shiny objects. It turns out that this reputation does not withstand empirical scrutiny. It isn't true.

Humans, however, are attracted to shiny objects. Is there a connection between that weird obsession and the diminishment of the Earth (foresters closing in)? If so, what does that mean for your practice?

Posted by Meredith Garmon at 11:23