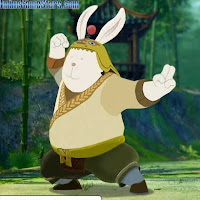 Bodhidharma was the semi-legendary human (470? - 532) who supposedly came from India to China and took up residence at Shaolin Temple and Monastery. His practice and teaching blended elements of Indian Buddhism and Chinese Daoism into what is now known as Zen. He is credited as not only the founder of Zen, but also of kung fu. Historically, this is highly unlikely -- hence Porcupine's question. ("Traditionally Bodhidharma is credited as founder of the martial arts at the Shaolin Temple. However, martial arts historians have shown this legend stems from a 17th-century qigong manual known as the Yijin Jing." -Wikipedia) How does mythology collapse into practice?


Raven took her students to see Stag Sensei, who taught kung fu at Bentpine. Stag gave a little talk and showed them some of the exercises.
Then in the Founder's Glade they bowed before a large stone in the form of Bunnydharma.
Back home that evening, Porcupine asked, "Was Bunnydharma really the founder of kung fu?"
Raven said, "That depends on your mythology.
Porcupine asked, "What is your mythology, Raven?"
Raven said, "I bow."


"Everybody needs to believe in something. I believe I'll have another beer." (Fear)

The believing's in the doing. The holy
Emerges from the worship. Trees
From sylvics, dendrology, forestry, timbering, carpentry.
On the question of what is really,
The steadfast practice needs not opine.

Posted by Meredith Garmon at 16:25