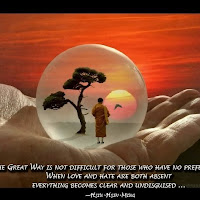 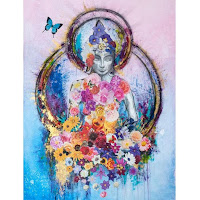 
The universe is too narrow; the sun, moon, and stars are all at once darkened. Even if blows from the stick fall like raindrops and the 'katsu" shouts sound like thunder, you are still far short of the truth of Buddhism. Even the Buddhas of the three world can only not to themselves, and the patriarchs of all ages do not exhaustively demonstrate its profundity. The whole treasury of sutras is inadequate to expound its deep meaning. Even the clearest-eyed monastics fail to save themselves. At this point, how do you conduct yourself? Mentioning the name of the Buddha is like trudging through the mire. To utter the word "Zen is to cover your face with shame. Not only those who have long practiced Zen but beginners, too, should exert themselves to attain directly to the secret.


The real Way is not difficult.
Direct word! Direct speech!
One with many phases,
Two with one.
Far away in the heavens the sun rises, the moon sets;
Beyond the hills the high mountains, the cold waters.
The skull has no consciousness, no delight;
The dead tree sings in the wind, not yet rotten.
Difficult, difficult!
Attachment and clarity; watch, and penetrate the secret!


"The supreme way has no difficulty" -- the words are straight, the speech is straight.
One has many kinds, two have no duality.
At the horizon, the sun rises and the moon sets;
Before the balustrade, the mountains deepen and the water chills.
When consciousness ends in the skull, how can joy exist?
The dragon howl in the withered tree has not evaporated.
Difficult, difficult: discrimination or clarity -- you see yourself.


Zhaozhou is quoting from the "Xinxinming," composed by the 3rd Patriarch, Sengcan (d. 606). The title, "Xinxinming," variously translates as "A Poetical Manuscript on Belief in the Mind," or "Song of Trusting the Heart," and, most commonly, "Faith in Mind." A verse translation is in the Boundless Way Zen Sutra Book, 3rd Ed., as "Heart of True Entrusting," p. 21. The first verse in the Boundless Way translation is:


The Great Way is not difficult for
those who do not pick and choose.
When pref'rences are all seen through,
the Way stands clear and undisguised.


"The supreme Way is not difficult; it simply dislikes choosing.
Only if there is no love or hatred, all is complete clarity."


"The real Way is not difficult. It only abhors choice and attachment.
If you have no attachments, you have positively attained clarity."


Discriminations like "delusion," "enlightenment," and "sentient beings" are wrong. If you abide in clarity, you need to preserve it, but if you do not remain in clarity, there's nothing to preserve, is there?


Here "clarity" means enlightenment. In other words, if you have no attachments you are enlightened -- a simple precept which forms the theme of the poem. Zhaozhou admired these lines but gave them a characteristic twist when he quoted them.
"With but a single word there may arise choice and attachment or there may arise clarity." If you come out into the world of the activity of consciousness (if you say but a single word), there may arise either delusion or enlightenment.
"This old monk does not have that clarity." I have no attachment, even to enlightenment. Enlightenment is valued, but if you are content with it and stick to it, then a new trouble will arise, namely, Dharma-sticking blindness. Zen students are supposed to throw away whatever they achieve as it is achieved. This is called, "leaving no trace."
"Do you appreciate the meaning of this or not?" Do you value the attitude of mind that does not stick to anything? But valuing this attitude is itself open to criticism, since it implies attachment to that state of mind. Zhaozhou knew this, but opened himself to criticism for the sake of teaching. This is called "trudging through the mire."
"If you do not have that clarity, what do you appreciate?" The monastic, in fact, levels just that criticism.


The supreme way means the highest truth. Seen from the Buddhist point of view, it is nothing but our essential nature. This is said to be "not difficult, it simply dislikes choosing." So, you should not be particular and selective, insisting that you like this or you don't like that. If you stay as you are, you are the perfect presentation of the supreme way itself. But if you start thinking in your head and get fastidious about your liking and disliking, then you spoil the supreme way. If you are hungry, you just eat; if you have some business to do, you get up and do it. It would be difficult if you insisted on sitting when you have some urgent business to do. But standing up to do something – there is nothing difficult about that. When your business is over, you may sit down again. If you are tired, you simply lie down. But usually people think that the "supreme way" is something more than that. They think the truth comes out of their brainwork. However, what comes out of their brain is not truth, but simply an idea, a concept of the truth. The real "supreme way" means standing up, lying down, talking, listening, eating, sleeping. Outside of our concrete actions in our daily life, there is no "supreme way."
"Clarity" means the world of satori, the world of equality or of essence. "An action of choosing" represents the world of discrimination, the world of phenomena. So if you utter one tiny word, you are already in one of these two worlds – either in the phenomenal world or in the essential world, either in delusion or in satori. You may think that the world of satori is by far the better one.
"This old monastic [i.e., Zhaozhou himself] does not dwell in clarity." Although he is evidently a man of satori, he does not dwell in the world of equality, in satori.
"Do you monastics want to keep a firm hold on it or not?" Although I am not in the world of equality, in the realm of satori, I wonder if you, the disciples around me, want to hold onto satori as something extremely important. – In this way, Zhaozhou is checking his disciples.
At that time there was a monastic attending who asked, "You say that you do not dwell in clarity. If so, what is there to keep a firm hold on?" The monastic is starting an argument, mixing up the two statements of Zhaozhou that his disciples might be keeping a firm hold on satori and that Zhaozhou himself is not staying in the world of satori.
Zhaozhou said, "I do not know either." How interesting! You see that the monastic is using logic to trap him, but with this "I don't know either," Zhaozhou, a truly perfected master, can sneak through any trap. Yet, the monastic, obstinate and cunning as he is, doesn't want to give up.
"If you say you do not know, why do you say that you do not dwell in clarity?" You say that you don't know. But just now you said that you didn't live in the world of satori. How could a man who knows nothing say such a thing? You said a minute ago that you were not in satori, because you knew it! You know that you are not in the world of satori. Why on earth do you maintain that you don't know? – Ordinary people would be driven into an impasse by this rigorous logic, not knowing how to find an appropriate answer. But Zhaozhou remains superb. He says, "You have already asked amply. Bow and withdraw." Is that all you have to ask? Then you are through with your questions. Make a bow and go back to your seat. Against such a surpassing master like Zhaozhou, no trap works.


The End It Is Easy

To say the word "Buddha" is to muddy your boots.
Say the word "Zen," make your face full of shame.
When a fish swims by, the water is muddied
When a bird flies by, a few feathers fall.
This is normal enough:
Just don't love or hate, you'll be lucid with fear.
Who can then do it?
Do you ask me to live stone cold!?
An upside-down question:
How dare you speak of difficulty and ease!
Dragons murmur in trees long dead.
They may exist, they may be a dream.
In two choices there's no possibility,
in one there's no hope to choose --
consciousness and point of view, chi and ching.
See for yourself, know what you see.
So far I understand nothing. 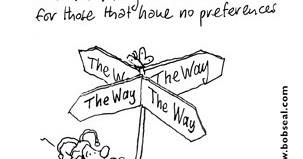 Posted by Meredith Garmon at 18:55