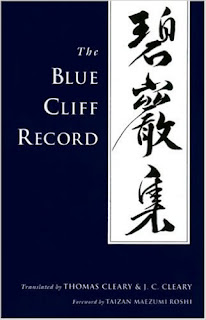 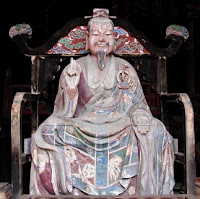 Personnel
Great Master Fu (Mahasattva Fu, Fu Daishi)(497-569) was Fu Hsi, a lay Buddhist contemporary of Bodhidharma. Fu was revered as a reincarnation of Bodhisattva Maitreya. A layperson with a wife and children, Fu was not only an earnest practitioner of Buddhism but also a philanthropist, generously bestowing his own wealth upon the people. Emperor Wu of Liang (464-549), was the founding emperor of the Liang dynasty and a devout Buddhist. Emperor Wu also features in BCR #1 (BOS #2), where he encountered Bodhidharma. Wu's attendant, Baozhi, is also in BOS #2.

Xuedou's Verse
Instead of staying in his hut,
He gathered dust in Liang.
Had Baozhi not lent a hand,
He would have had to leave the country,
As Bodhidharma did, by night.

Sekida's Notes
The scene was the magnificent imperial lecture hall. A great array of dignitaries was no doubt present. Great Master Fu (497 - 569), in positive samadhi, ascended the platform and sat down. There was a hushed silence. Then he took up his baton, struck the lectern, and quietly descended from the platform. The audience, which had been holding its breath in anticipation, was astounded. But this was a genuine demonstration of the Diamond Sutra, in which we find such expressions as "There is no Dharma to be preached, and that is called Dharma preaching"; "The past mind is not attainable, the present mind is not attainable, the future mind is not attainable"; and "Abiding nowhere, let the mind work." Another sutra says, "You preached nothing, I heard nothing." No preaching and no hearing: that is true prajna [wisdom]. The emperor was a devout Buddhist, but his interest lay chiefly in studying the Buddhist scriptures. He had no true understanding of Zen. Baozhi was a well known priest in whom the emperor had great confidence. The emperor said, "No, I do not understand." The mature Zen master also says he does not understand Zen. There are many kinds of not-understanding Zen. Nowadays, there are many who do understand Zen.

Yuanwu's Commentary
People hardly understand: the Great Master Fu only brought up the transcendental mainspring and briefly showed the swordpoint, to let people know the ultimate intent, directly standing it up for you like a mile-high wall. It was only appropriate that he should be subject to Baozhi's ignorance of good and bad in saying, "The Great Master has expounded the scripture thoroughly." Indeed, he had a good intent but didn't get a good response. It was like a cup of fine wine, which was diluted with water by Baozhi; like a bowl of soup being polluted by Baozhi with a piece of rat shit. But tell me, granted that this is not expounding the scripture, ultimately what can you call it?

Hakuin's Commentary
When the great master shook the lectern, it was a brilliant act.
"The great master has delivered his lecture on the scripture" is a flaccid statement, not worth taking seriously; and yet there is no other possible answer either.

Tenkei's Commentary
The great master shook the lectern -- Did you all hear? If you have ears, hear!
The emperor was flabbergasted, wondering what this unfamiliar lecture was all about.
The great master has delivered his lecture on the scripture. With Baozhi's help, he's looking a bit better.

Yamada Koun's Commentary
In "Emperor Wu Asks Bodhidharma" (BCR #1, BOS #2), the Emperor asks, “What is the first principle of the holy teaching?” In both instances the Emperor is hoping to hear about the very essence of Buddhism. Bodhidharma answers, “Vast emptiness, no holiness.” The Emperor had thought that he was in the presence of a very holy person. But here is that same person saying that there is nothing that is holy. While Bodhidharma says, “Vast emptiness, nothing holy,” Fu just strikes the dais. Perhaps you have an inkling now of what is going on. Fu was presenting the very essence of Buddhism with his action. There are many similar koans: “A Non-Buddhist Questions the Buddha” (BCR65); “The World-Honored One Ascends the Rostrum” (BCR92/BOS1); “The Buddha Twirls a Flower” (GG6); “Yaoshan Ascends the Rostrum” (BOS7); "Vimilakirti's 'The Gate to the One and Only'" (BCR84/BOS48). It’s too bad if we need someone shouting in our ears or hitting us with a stick to bring us to our senses.

Shake the desk, shake the seat --
That's all I will say.

Do not sleep in the birch grove,
find the desert and make dust out of dust.

If you want marvels, look at the gray skies:
No Buddha above, no sentience below.
Appear in the world, know mist clarifies;
lucidity in the darkest clouds.

Hotetsu's Verse
Other masters of the time opened their mouths, spoke at length,
Polished and clarified the Diamond, edified audiences.
Today we speak of Fu, who spoke not,
And speak not of the masters who spoke.
Were not Baozhi's ghost whispering the poisonous question, "Have you understood?"
We would not distinguish chatter from silence.
Posted by Meredith Garmon at 22:27