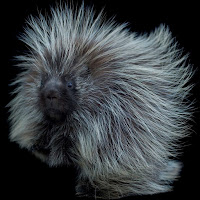 What is it that makes people gather? "Students began to gather" -- but what was it that drew them?

Raven took Brown Bear's instruction, "Try camping out for a while," to heart. She wandered a long time, from forests to upland meadows to icy lakes. Finally, with pinfeathers under her beak getting sparse, she found an abandoned place in a tall spruce tree. She fixed it up, and students began to gather, including Porcupine, who had studied with Coyote Roshi. Other early students were Woodpecker, Grouse, Badger, Owl, and Black Bear, who lived nearby. They would sit in a circle in the little meadow under the tall spruce. Raven would sit with them and afterward would respond to their questions, and at more formal teaching times, she would take a perch in the outer branches of an oak tree close by -- the Assembly Oak, as it came to be called. A stone outcropping served as an altar.

Wander. Find something abandoned and tall.
Fix up. Sit with what gathers.
Take a perch. Rinse. Repeat.
How could anything be grander than life?

Posted by Meredith Garmon at 16:56