Personnel
Nanquan Puyuan (748-835) has appeared in our seven previous cases. 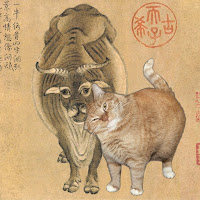 Wansong's Preface
He hates to incur the disgrace of becoming a Buddha or becoming an Ancestor. Affirmatively, he places those having horns and bearing fur in a superior position. Therefore, the true light does not blaze, and the great wisdom is like a fool's. Furthermore, he takes advantage in being deaf and pretends to be illiterate. I wonder who this is?


Limping, limping. Palsied, palsied.
Frayed, frayed. Unkempt, unkempt.
The hundred aren't appropriated. Even one is not worthwhile.
Wordless, wordless. He himself knows the calms of the fields.
Potent, potent. Who's to say in his guts he's a fool?
Throughout the Dharma realm, all becomes his food.
With drooping nose, he's content to be full.


Limping and palsied, tattered and disheveled.
A hundred can't be taken, one isn't worth it.
Silent, knowing himself the peace of his state;
Ebullient, who says in his guts he's a fool?
All throughout the universe, everything becomes food --
Nose hanging all the way down, one may freely seek to repletion.


There are a number of interpretations to the present koan. The most obvious one would be that we should somehow be like cats and cows. They are very natural and contented. Cows are contented chewing their cud, but many of them are herded to the slaughterhouse where they end up in a hamburger. Cats earn their daily meals by lying around all day and purring when you pet them. If we dig a bit deeper, and we recall that "not knowing is most intimate," then the Buddhas of the Three Times that don't know it are most intimate. The cats and cows that know it are projecting their cat and cow perspective onto reality. There is a third interpretation. All buddhas of the three times are sitting on a heavenly seat on a solitary peak. Cats and cows that have to come down the mountain are precious. Cats and cows are in the world. They face the slashing of the butcher's knife and the aggression of the neighbor's dog.


The Buddhas of the three worlds know nothing of such things -- the essential world, enlightenment, kensho, Buddhism -- nor do they know of Mu or the sound of one hand. Let’s say, for example, that you have experienced kensho and realized your own essential nature. As long as there is something like “essential nature” in your head, it is still not the genuine article. If you have truly become one with it, you are not aware of it in the least. As long as there is an awareness of something like “essential nature” it is not yet the real thing. To be sure, you must realize some time the essential world. But then you must gradually sweep away all traces of it so that any traces of enlightenment disappear. It’s a matter of extinguishing the light. Any consciousness of enlightenment or something special must disappear. It’s the animals that know about "such things." What does this mean? It means people who stuff their heads with concepts such as Zen Buddhism and attempt to understand things intellectually. Such persons are referred to as “cats and oxen.”


Nanquan is an unparalleled teacher of our school. He acts unasked, and in a single phrase knows how to kill and give life. In one action, he is able to roll it out and roll it in. If you wish to understand the body of reality, don't look to ideas and descriptions. Don't look to buddhas of the past, present, or future for the truth. You must see for yourself. What's here now? Don't you see? Each particle of food in the bowl is tasty; each drop of water in the spring is wet.

Cats lick their fur and purr; cows chew their cud contented.
Such different kinds just see how It Is,
Just like this and here replete; satisfied wearing horns and fur.
While all poor benighted buddhas and ancestors
Remain stuck in not knowing; the shame of the house.
Poor Daowu’s finger bleeds with pain at noble Yunyan’s sheer obtuseness.
Willingly transgressing he lingers with water buffaloes down the hill,
And enjoys taking the kids on yet another visit to the petting zoo.

In the city of Medina
Muhammad allowed his camel
to choose his future home.
Animals know intimately
what the wise fail to understand.
And yet their cries continue
from the holding pens
and the slaughter house.

Posted by Meredith Garmon at 07:46