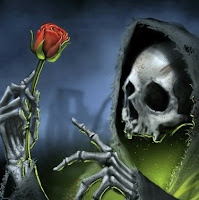 
Yuanwu:
When right and wrong are intermingled, even the holy ones cannot distinguish between them. When positive and negative are interwoven, even the Buddha fails to discern one from the other. The most distinguished man of transcendent experience cannot avoid showing his ability as a great master. He walks the ridge of an iceberg, he treads the edge of a sword. He is like the kirin's horn, like the lotus flower in the fire. Meeting a man of transcendent experience, he identifies with him as his equal. Who is he? See the case.

Wansong:
Sansheng and Xuefeng are spring orchid and autumn chrysanthemum. Zhaozhou and Touzi are Bian's Jewel and Yan's Gold. In the marked scales, both trays balance evenly. In the bottomless boat, they cross over the river together. How about when both people meet?


Zhaozhou asked Touzi, "How is it when a person who had died the great death comes to life?"[1]
Touzi said, "They should not go by night. They must arrive in the daylight."[2]


Yuanwu:
[1] There are such things! A thief doesn't strike a poor household. He is accustomed to acting as guest, thus he has a feel for guests.
[2] Seeing a cage, he makes a cage. This is a thief recognizing a thief. If he wasn't lying on the same bed, how would he know the coverlet is worn?

Wansong:
[1] The probing pole is in his hand.
[2] The shadowing grass is around him.


Open-eyed, he was all the more as if dead;
In living is an eye that's yet the same as dying.
What use to test the master with something taboo?
Why use antiserum to test an adept?
Even the Buddha said he had not reached there;
Even the ancient Buddhas, they say, never arrived;
Who knows when to throw ashes in another's eyes?
Who know who can scatter dust and sand?


Even before the mustard-seed, castle and the kalpa stone,
the beginning is to be subtly investigated.
The seed castle, the aeon rock -- subtly exhausting the beginning.
The vital eye illumines the emptiness within the ring.
The living eye in the ring illumines vast emptiness.
Not allowed to travel by night, arriving at dawn,
Can't go by night -- arrive by the dawn's light.
the message does not depend on the goose and fish.
The sound of the family couldn't be entrusted to goose or fish.


A cold question, this has a meaning outside the words. This is great death far from delusion, and far from enlightenment too.


One who has experienced great death means someone who has set aside everything, even the mysteries and wonders of Buddhism, affirmation and negation, gain and loss, and managed to become as if dead. However, to remain in that state is to get fixated on mindlessness, falling into a nonfunctional state of indifference, so one must come back to life, not keeping that state but tossing it into emptiness, thus neither grasping nor rejecting everything, attaining the realm of absorption in living. One is useless unless one comes to life, but how do you do it? Don't try to find your way by night, wandering around disoriented; go by day, Touzi says. Talking about dying and reviving is not yet reaching the original unaffected state but trudging along midway, so it is work in progress.


The Great Death is the condition that appears in absolute samadhi, in which the activity of consciousness is stopped and the state called "body and mind fallen off" is reached. The delusive thinking of ordinary consciousness is cut off and your mind is purified. When you then come back once more to the ordinary activity of consciousness, you will find that it has undergone a great change. It is released from its spell, and suddenly you come to realize your true nature. The old self-centered world has been replaced by a new world of unity and equality. This is what happens when someone of the Great Death comes back to life again. Zen training does not stop here. This is the starting point of real Zen practice. The cultivation of Holy Buddhahood after realization is awaiting you. It is a process of ripening, of becoming mature. Unless you do this, everything remains green and unsatisfactory. Cast off attachment to your own realization. Forsake what you attain as it is attained, and try to reach a wier world -- wider and wider, until it is as boundless as outer space. Then you will understand emptiness. Touzi's reply means "A thief goes by night; you must not go stealing about like a thief. Come to me when you have attained the light of the mind."


To die the great death in Zen means to practice the koan Mu and die completely to all concepts and thoughts. If this state continues, then suddenly an entirely new world will unfold. This is coming to the great life. Zhaozhou is asking in effect, "How will you treat a man who has died the great death and come to great life?" This is bait on Zhaozhou's hook as he waits to see how Touzi will respond. Touzi said, "I won't admit night-wandering vagabonds. You must come in the light of day." This is a good answer. But what does Touzi mean by "night-wandering vagabonds"? In the world of phenomena there is birth and death. But if you can truly grasp your essential nature, you realize that there is neither life nor death. Touzi is saying, "What are you doing, babbling on about life and death? Since there is essentially no birth and death why do you come saying things like, 'How will you treat a person who has died the great death and come back to life?' Don't make such suspicious talk. I have no time here for night vagabond monks. Come out into the broad daylight!" A truly clear and forthright answer. He could never have made such a splendid response if he paused to consider what to say. It comes forth completely natural and spontaneous to fit the occasion and the understanding of the student. But such naturalness and spontaneity are not easy to come by. A true Zen master must be just such a person. There are no set patterns or prescribed rules to follow.


To Die a Great Death

Even the wise can't always tell
where right and wrong are mixed
A man stands out from the crowd.
He scratches thin ice like a unicorn's horn
He burns like a lotus on fire.
After the great death, how will he come back to life?
Only by daylight, never the dark.
There are such things!
A thief knows to stike the rich.
Seeing a cage, he makes a cage.
A flute with no holes strikes the soundboard of silence.
How is it before the rooster has crowed?
The sound does not exist.
And how it it after the crow's time has gone?
Each knows the time for himself.
If you want intimacy, ask no questions.
The eye blinks in death the same as in life.
Even the ancients have never arrived.
I don't know who scatters dust in the sand.
If it's you, now is the time to stop.


Dying away, coming to life -- his fangs are still showing.
One should arrive during the day -- already he's gone ahead.
In the villa pond of whose house --
A pair of mandarin ducks -- they cannot be depicted.


The Great Death is dropping away body and mind, totally penetrating through all of the barriers set up by the ancients and by your own self-grasping ignorance. It means letting go of all your defneses, all your projections, and finally letting it all drop away. What about when he revives? That doesn't mean grabbing on again to all these projections and beliefs. It's seeing clearly this life as it is. Great Death releases us to Great Life. After letting go and coming back again, you live a very ordinary life in a most extraordinary way. You'd better see it clearly if you're going to talk about Great Death. You had better not arrive at night, not quite sure what it is, clinging onto the ghostly shapes. Come in full daylight when it becomes Great Life.


It seems as though Zhaozhou is going out of his way to torment this old hermit. When the ancient masters traveled around like this visiting adepts, they wanted to see if their eyes were open. If there is even the slightest attempt to understand this encounter in terms of Buddhist doctrine or theory, this is not yet having died the great death. On the other hand, if you turn to blank consciousness to perceive it, you will only see the darkness of a ghost cave. It can be said that this is truly a case where the answer is in the question and the question is in the answer. Haven't you heard? Spring is always in the frozen branches, buried beneath six feet of snow. However, unless you first realize the truth you cannot engage it. So cut off both light and darkness and say a word.


A frozen tree blossoms
in the dead of winter.
Rising autumn mist reveals
a collage of red and gold.


No Leaving, No Returning

Coming back to life after the great death is like
speaking perceiving and acting in a dream of not knowingness
Immediate recognition of Mu
You never come back to life,
nor did you ever enter or leave life
Leaving and returning is like untransduced sound
Noise without meaning


Zhaozhou and the Great Death

Night will turn into day.
The tin cans will gleam
in their recycling bins
and the crows
torn away from the darkness
will begin to caw.

If death were then
to make an appearance
he would be somewhat insignificant:
a piece of broken tile
a frayed doormat
the handle of a broom.


Of course you lose your life.
They paint the walls
after your departure,
place ancient artifacts
into cardboard boxes.
Someday, if you do return
it will be a different season,
and you'll enter by a different door.


"After the ecstasy, the laundry."
What is on the other side of death
Was always here on this side
Waiting, like the daylight and the laundry.