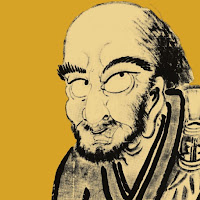 
Linji asked the temple steward, "Where have you come from?"
The temple steward said, "From selling brown rice in the province."
Linji said, "Did you sell all of it?"
The manager said, "Yes, I sold all of it."
Linji drew a line with his staff and said, "Have you sold all of this too?"
The manager shouted, "Kaatz!"
Linji immediately struck him.
Later, the tenzo came to Linji, who told him about this incident.
The tenzo said, "The steward didn't understand Your Reverence's intention."
Linji said, "How about you?"
The tenzo made a deep bow.
Linji struck him likewise.


Linji's total activity -- excellent quality.
Linji's whole dynamic -- the character and tone are high:
His staff-tip has the eye to distinguish autumn fur.
On the staff is an eye which can distinguish the finest hair.
Sweeping away fox and hare, his style is precipitous.
Sweeping out the foxes and rabbits, the family manner is strict,
Lightning and fire scorch, transforming fish and dragons.
Transforming fish to dragons, lightning fire burns.
Life-giving sword, death-giving sword.
The life-giving sword, the death-dealing sword:
Leaning against heaven, illuminating the snow,
Leaning against the sky, shining on the snow,
more sharply than the hair-blown sword,
sharp enough to sever a hair blown against it,
evenly performing the decree, distinguishing delicate flavors.
Equally the order's carried out, but tasting differs --
Who meets this painful spot utterly?
Where it's totally painful, who is it that experiences it?


The steward doesn't take the first bait, so Linji throws out a second line. Is he asking about selling rice when he says, "Is it all sold?" Did you sell every bit of it, including your self? Did you see that all form is empty, including inside and outside? Did you drop away body and mind? But even that second arrow didn't go very deep. The monk had all his defenses up. He said, "Yeah, I sold it." Still, Linji doesn't give up. He throws out more bait. He hold up his staff, draws a line. "Did you sell this?" This is priceless. You may have sold the rice, but you can't put a price on this. The monk shouts; Linji hits him. What was Linji demonstrating by hitting him? Linji really cared about his monks. He used his stick to put energy in the monk's body. In many of these cases, a blow from the stick and everything's forgotten!


Zendog
Fox, coyote,
firedog, sundog, fogdog, dog dog,
wolf! - following the tracks home,
the book falls open and hits the mark.
Ryokan’s moon a torch to see
shining on the snow, a diamond blade
of hoar grass.
What person? What world?
A gourd dipper on a branch click, clack.
“It’s you, it’s you!”


Drawing a line with a staff is an action that contains the whole catastrophe; thus! Did you sell it all? Did you sell trimming the shrub, planting a tree, cooking the soup, editing a text? Is there any sacred activity that remains, or is it all gone? The director walks into Linji's trap and answers with a shout. He leans and falls over. Linji responds to the imperative and hits him. How would you have answered Linji?
The head cook sees that the director misses the point and presents his understanding with a bow. Linji hits him too. Tell me, are these two hits the same or different? To say the same misses it; to say different is off the mark; to say both or neither is a thousand miles from the truth. If you want to see into the point of Linji's actions, you must first understand being-as-it-is, which is the nature of things in objective reality, without the distortion of ideas and concepts.


Eloquent mouth and clever tongue diminish virtue;
cutting off the ten directions gets failing grade.
Opening up and kneading together.
spring is met at every turn.


It doesn't matter
if you're strong as iron
or meek as a lamb,
the ingredients of your demise
have been cooking for a long time.
Already you wear
a charcoal necktie
and a halo of small blue flames.


Sell your shout for a whack, or your bow for the same,
Sell all that you've grown, lose your load, lose your name.
Still that trace of the staff is beyond an exchange
'Cause what's given for free is in no one's price range.