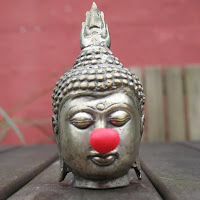 
The Great Way manifests itself naturally; it is bound by no fixed rules.
The teacher does not have to exert himself to bring his students under control.
Tell me, who has ever given such an example? See the following.

[3] Or: "Sir, is there not the sound of breaking wind?" (Shaw); "Oh, Master, don't make farting and grunting noises" (Yamada); "Teacher, doesn't your asshole make farting sounds?" (Cleary); “Master, don't fart around so loudly" (Sato).
[5] Or: "Coarse words or subtle talk, all returns to the primary meaning" (Cleary); “’Slanderous words and fine phrases all return to the highest principle’" (Yamada); 'Rough words and gentle phrases return to the first principle' (Sato).


Touzi! Touzi! The wheel turns unchecked.
Touzi, Touzi -- his wheel of potential's unhindered.
One shot, two victories! That blow, this blow!
Releasing one, he gets two; same there, same here.
Pity him who mocks the tide:
Pitiful the endless people playing in the tide
He will fall in it and die!
Who in the end fall into the tide and die.
If he suddenly comes alive --
If they suddenly came to life,
A hundred surging, roaring rivers!
The hundred rivers would reverse their flow with a roar.


Buddhas use soft words;
For the ignorant they speak roughly.
Rough words and soft words, both lead to
The first principle.


"Yes, it is true." Touzi's acceptance without the slightest fuss is quite easygoing. "Don't fart." He boldly took the bait and swallowed the hook. "What you say sounds like farting." A tyrants dog barks at a benevolent king. Touzi hit him, "capturing him alive without expending superfluous effort." "Coarse words and fine speech" -- Disregarding danger and destruction, he asks another question; an extraordinary monk. "All end up in ultimate truth" -- the ultimate truth of the holy truths and teachings of Buddha, that is. In the Five Lamps Merged in the Source, these two questions are asked by two different monks. "Touzi said, 'Yes' -- Cornered him again. "Can I call you an ass?" This is the view of false equality.


The monk poses his first question with a conceptual trap, but Touzi saw right through it. "Yes, it is true," Touzi says, letting go. This is a hook to fish out any further sayings the monk has prepared, a trap to fell a tiger. "Don't fart." Taking the hook, he tells the teacher not to talk like farting , because the stench is unbearable. He twisted it around just as he had planned, but then Touzi hit him. This is where Touzi settles the case according to the facts. "Can I call you an ass?" "If noble and base, high and low, good and bad, right and wrong, all wind up in ultimate truth, I guess it doesn't matter if I call the teacher an ass," he flung back dismissively. Touzi hit him -- at that rate, there's no preventing this beating.


All the myriad appearances of the phenomenal world are the essential world itself. And now here is a monk asking Touzi if all the sounds in the world are truly the voice of the Buddha. Touzi's answer, “Right,” transcends all distinctions of difference and equality. Touzi speaks while observing the living fact. In this respect, his answer is the same as Zhaozhou's Mu. There are the two aspects of difference and equality. Difference is the phenomenal world where everything is separate and distinct. Equality is the essential world which is totally empty. But these two are actually one and the same. Touzi is, in effect, leaving himself wide open to attack. The monk can attack from the aspect of difference or from that of the essential. “Oh Master, don’t make farting and grunting noises.” The monk has something up his sleeve as he tries to trip up his master. He is still caught up in ideas of “Oh, this too must be the voice of the Buddha!” as he carries his excess mental baggage about in futile attempts to trick Touzi. His “hidden” motives are actually visible from a mile away! “Touzi hit him.” Whack! To say that all sounds are the voice of the Buddha is to speak from the standpoint of the essential world. But the essential and phenomenal are actually one and the same. In the phenomenal there is distinction. There are things that we must say to our superiors as well as things that we must avoid saying out of respect. Otherwise, everything descends into a state of “bad equality.” It’s all right to say that there are essentially no distinctions but we must never forget this aspect of the phenomenal. We are all equal as human beings, but there are very important distinctions (parent-child, teacher-student, etc.) which must be observed. We must not fall into “blind equality.” This monk is forgetting this and clinging to the single aspect of equality. That is one interpretation. I see Touzi, however, as striking at that concept in the monk’s head, those ideas of “This, too, is the voice of the Buddha!” These are the concepts which would lead the monk to try to set a trap for his master. “Don’t be caught up in concepts!” Touzi seems to say as he strikes the monk. The minute Touzi sees concepts appearing on the horizon he strikes. “Slanderous words and fine phrases all return to the highest principle." “The highest principle” is the true fact, the fact which exists before meaning arises. Whether it be coarse language or fine phrases, it is all the essential fact. The monk’s second question is the same as the first. “May I call Master a donkey?” Whack! Touzi hits him immediately with his stick -- not to strike back at what he considered an instance of blind equality, but against concepts which would lead the monk to try to trip his maser up on his words. Needless to add, if we were to analyze the monks thoughts we would find more than enough traces of bad equality mixed in. But that is not the reason Touzi is hitting him. “Get rid of those concepts!” he's saying.


With that one word, 'Yes' Touzi smote that insolent monk twice, and each of those strokes with his staff had the same effect. He was sole victor in that argument. The monk's arguments about the voices and sounds of the Buddha were trivial.


All Sounds are Sounds

Is it true that all sounds are the voice of the Buddha?
Sure, it is true.
So would the master please stop sounding like a pile of shit?

A sure path to a beating, this line of inquiry.
How pathetic, these people at play in the sea!
In the end they'll collapse and drift out with the tide.

The sound of death, defecation, release to the earth.
It's useless to stop and think.
Shake the seat of your pants,
find a place to sit down and establish your lives.


Everything flawless and perfect --
For all that
No less screwed up, broken, wrong.

Everything a mistake, a punishable offense
For all that
No less elegant, beautiful, exactly right.

Does disrespect present the Buddha's voice?
Does it display the highest principle?
Yes.
As does a cudgel to the solar plexus.

"Do justice, love kindness, walk humbly"
the Roshi Micah said. Hotetsu adds:
and observe the grammar of formal and familiar.
Total liberation from all constraint
Comes with some constraints.