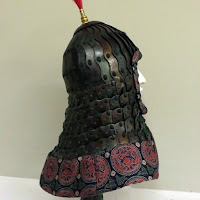 
Bodhidharma met Emperor Wu of Liang[1], solely wishing to transmit the heart-mind.
Yanguan[2] knew Dazhong[3]; he certainly had the eye.
“Peace prevails under heaven, the king enjoys long life”[4] he doesn’t violate heavenly majesty;
“The sun and the moon rest the landscape in peace, the four seasons are all in harmony”[5] -- the king’s reign augments its sovereign light.
When the king of people and the king of the Dharma meet,
What should they talk about?

[1] Wu of Liang (464-549, r. 502-549) was the founding Emperor of the Liang dynasty and one of China's earliest Buddhist emperors. See BCR1/BOS2.
[2] see BCR91/BOS25.
[3] "Dazhong" is the name of the era, used here to refer to Emperor Xuanzong (810-859, r. 846-859). Before becoming the emperor, Xuanzong was a disciple of National Teacher Yanguan (750-842), who recognized Xuanzong as a man of great caliber and told him to foster the Buddha-Way when the latter was to take over the throne. In fact, the Buddha-Way came to flourish during Xuanzong's reign -- which followed intense persecution under the previous ruler, Daoist Emperor Wuzong (814-846, r. 840-846).
[4] These are words attributed to the 10th Indian Buddhist Patriarch, Parshva (Barishiba, Kyo) in his dharma combat with Ashvagosha (Anabotei, Memyo) in ancient Magadha. Ashvagosha would later become the 12th Indian Buddhist Patriarch.
[5] Words attributed to Mahasattva Fu (Fu Daishi, 497-569), praising the virtues of then-Emperor Wu of Liang.


Emperor Tongguang spoke to Xinghua saying, “I have attained the treasure of the Central Plain.[1]
However, no one can set a price on it.”[2]
Xinghua said, “Your Majesty, please lend it to me so that I may see.”[3]
The emperor pulled the straps of his helmet hood with both hands.[4]
Xinghua said, “Who can dare to set a price on the emperor's treasure!”[5]


[1] Don't brag so much.
[2] Even if you bankrupted the whole country, you still couldn't get it in exchange.
[3] He takes the opportunity to receive the authority.
[4] Lucky to meet the appropriate person.
[5] At once both are satisfied, with no particular lack.


His Majesty's basic intent is told to one who already knows.
The sovereign's underlying meaning, he speaks to a connoisseur.
All under heaven have total devotion, a sunflower's heart.[6]
All in the land incline to sincerity, hearts like sunflowers.
The capital's priceless treasure's taken out;
Bringing out the priceless jewel of the Central Plain,
it's not omparable to Zhao's[7] jade and Yan's[8] gold.
It's not the same as the gem of Zhao or the gold of Yan.
The capital treasure presented to Xinghua
The jewel of the Central Plain is shown to Xinghua:
the primal light is hard to price.
One beam of light, it's hard to appraise.
The emperor's reign sets an example for ten thousand generations.
The emperor's action can be teacher of ten thousand generations:
The Golden-Wheel King's[9] brilliance lights the four lands under heaven.
The light of the golden wheel shines all over the world.

[6] The sunflowers naturally incline toward the sun: a metaphor for a virtuous ruler who attracts all people.
[7] Cf. the Verse (with Risôjo) of BOS18 and its note.
[8] King Shô of Yan is said to have put a massive sum of gold on the table and invited celebrities to his palace.
[9] In the ancient Indian mythology there were four kings around the Mt. Sumeru: the king of iron wheels reigned over the southern part of the mountain, the king of bronze wheels the southern and eastern parts, the king of silver wheels the eastern, western and southern parts; only the king of golden wheels ruled over the northern, southern, eastern and western parts of the mountain. (Sato's notes)


When he opened a teaching hall, in offering incense he said, "This one stick of incense -- part is for my teacher and elder brother Sanshen, who was too auster with me; one part is for my teacher and elder brother Dajiao, who was too indulgent with me. These do not compare to offering to my late teacher Linji."
A monk asked, "When it comes from all directions at once, what then?"
Xinghua said, "Hit the one in the middle."
The monk bowed.
Xinghua said, "Everyone, yesterday I was going to a meal in the village, but halfway along I ran into a violent wind and fierce rain, and would up in a spirit shrine avoiding it."

When Emperor Tongguang went to Hebei, a monk asked Xinghua, "How is it when the journey of the king has a limit?"
Xinghua said, "Galloping on five hundred mounts a day."
As the emperor was returning, he stopped at the transient palace in Weifu, and summoned Xinghua to come there.
After the emperor gave Xinghua a seat and tea, the present case unfolded.


The emperor was delighted and gave him a purple robe and a "Master" title. Xinghua didn't accept either of them. The emperor also gave him a horse to ride.

Related Case (in Ferguson, from the Guzunsu yulu)


The late Tang dynasty emperor Zhuangzong honored master Xinghua with the gift of a riding horse.
While the master was riding the horse it was startled and the master fell off, injuring his foot.
The emperor sent some special medicine to the master to help heal his foot.
Xinghua gave instructions to the monastery director, saying, “Make me a walking stick.”
The monastery director made the stick and brought it to Xinghua.
The master took the stick and proceeded to circle the hall, and as he did so he asked the monks, “Do you recognize me?”
The monks answered, “How could we not recognize you?”
The master said, “Dharma Master Foot! He can speak but he can’t walk.”
Xinghua then went into the hall and instructed the attendant to ring the bell and assemble the monks.
Xinghua then addressed the monks, saying, “Do you recognize me?”
The monks didn’t know what to say.
Xinghua then threw down the staff and passed away solemnly in an upright position.


I say, first let's get to know the sovereign; then we must know he is in the Central Plain; after that I want to ask where your jewel is.


Did Xinghua agree with the emperor or not? If he did, where are Xinghua's eyes? If not, where is the emperor's error?


What the Most Honored One has obtained can only be observed from the side; if it were anyone but Xinghua the adept, time after time it would be sold off at a high price.


Xinghua's play at the time could be called extreme; how can it be settled now?


The real doesn't cover the false, the crooked doesn't hide the straight. Those who have eyes discern.


Xinghua for a time saw the opportunity and acted -- what could be done? -- he buried away that emperor of the court. At that time, if he had just told him that an oyster pearl, even if you get it, has no use, and tuaght him to have a separate life thereafter, they'd have avoided hindering each other. Right now if someone questions again how do you price it?


We must first grasp what the treasure really is. Why does nobody prize it? Then we must see how a person of the Dharma treats a person of unbridled power. If this treasure is bright and sunny and shiny, it would attract all kinds of seekers. But, when the treasure is hidden, who will see it and value it? Xinghua doesn't agree with the emperor's understanding in this case yet still encourages him without patronizing him or alienating him.
[5] If Xinghua named the price too low, he would insult the emperor. If he named the price too high, he would give false praise. Truly, it's priceless.
When the emperor pulls his hat strings, it's like a king tapping his crown. How do you relate to people without insulting or flattering them? Great vows of compassion come and go, but who can put it into practice?

Tongguan had a jewel that was hid in his hat,
don’t stop at his hair, you must go beyond that,
surprising to say if you reach his jewels lair,
it’s brilliant and bright and yet nothing is there.


Geronimo surrendered
to the U.S. army
at Skeleton Canyon.
(So many had died
in the mountains.)
As an old man he sold
photographs of himself
for 25 cents each.


Dear god of triumph and of wasted days,
Of résumés and of addictions,
I wonder at the worth of me and us,
What price would be our measure?
In such a market, as folktales tell,
The devil is the only buyer.

What we fashion from the years --
Fronts of patina, and backs rough-hewn --
Is only for giving away,
To what takers we find -- not
For the market. Besides, as folktales tell,
The devil is the only buyer.

Dear god of triumph and of dissipation,
Let me leave the market for market things;
Craft by dint of grace and years blindly
The gifts I cannot see yet must bequeath;
And wash off the sticky folktale conceits,
Of worth, and price, and buyer.