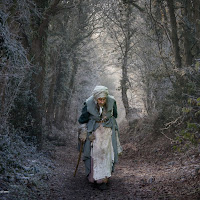 We've seen Turkey just once before, in #38, wherein she asked, "why don't you have more songbirds in your community?" Raven offered, "Maybe they're content to inspire us from the trees." Turkey then  asked how the songbirds can be inspired, and Raven answered, "Make sense."
Here we learn that Turkey has been hanging out around Grandma's house -- and that Grandma knows a thing or two about animals -- and Zen.
Grandma seems to know about an episode from the life and teachings of Shoushan Xingnian (926-993), as related in Case #43 of The Gateless Gate, compiled by Wumen Huikai in 1228:

Shoushan's disciple, Shexian, legend has it, grabbed the stick, broke it in two, threw it on the ground, and shouted, "What is this?" Similarly, in Gateless Gate #40, Baizhang Huaihai (720-814), "took a water jug, put it on the floor, and said, 'You may not call this a water jug. What will you call it?'" Guishan Lingyou (771-853) responded by kicking over the water jug and leaving. Here's Wumen's verse on Case #43:


"Holding up a stick,
He issues the order to kill and to give life;
When adhering and opposing interweave,
Even Buddhas and patriarchs beg for their lives."

Shexian's and Guishan's responses -- as well as Master Raven's in the case below -- are essentially the same. Can you show a different way of being neither committed to the name nor opposed to the fact?


Grandma had been living at Vinecot for as long as anyone could remember. She was white-haired and bent, and walked with a stick. She was a friend of Turkey, who had free run of her house.
One day she came to see Raven who promptly flew up into the Assembly Oak. “Come down here, Raven Roshi,” she said. “I want to talk to you.”
Raven flew down before her and observed, “We understand each other.”
“Oh,” said Grandma, “I’ve been living in the forest for a while. I just pay attention to what I hear. There’s a certain frequency.”
“For us, too,” said Raven.
Grandma said, “I didn’t come to see you to gossip about communication.”
Raven drew herself up. “I’m forgetting my manners,” she said, bowing. “I’m pleased to meet you. You have come quite a long way. To what do I owe the honor of this visit?”
Grandma held out her stick and said, “I just wanted to ask you what this is.”
Raven let out a croak and flew at the stick. Grandma pulled it away and said, “It’s mine. You can’t have it.”
Raven said, “Is that so? I see. I see.”


A stick is not a stick
When it is just a stick.
In the dawning light --
The call to breakfast.

Posted by Meredith Garmon at 17:53