Raven 66: Too Clever by Half 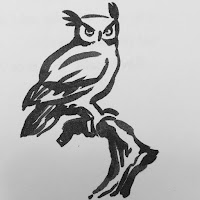 Sun and moon, mountains and rivers, sticks and stones -- all of them are Buddha-nature. What is this "represent" nonsense? What's the possessive pronoun doing there? I think I'd fly away too, and I don't even have wings. Much.


Owl then spoke up. "Are you saying that her stick represents her Buddha-nature?"
Raven launched herself from her perch without a word and flew out of sight.
Porcupine said, "Don't you see? It's a plain old stick. It doesn't even have a rubber tip."
Owl said, "Sometimes I think I'm just too clever by half."

Sun and earth make pine and hyacinth, and
The hummingbird outside the window
Beats her wings 80 times a second --
Without trying.
Even my pushing, willful, effort
Arrives and unfolds effortlessly.

I might say,
It is difficult to know the ease of things --
meaning only,
One settles into such knowledge slowly,
And if the thing is kept at.

Posted by Meredith Garmon at 14:20