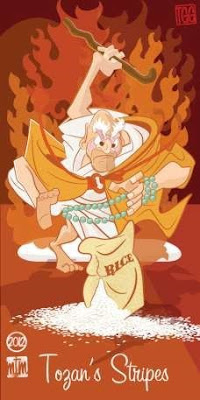 
When Dongshan [Shouchu] came to Yunmen for instruction, Yunmen asked, "Where have you come from?"
Dongshan said, "At Hozu Monastery, south of the lake."[1]
Yunmen said, "When did you leave there?"
Dongshan said, "On the twenty-fifth of August."
Yunmen said, "I spare you sixty blows."
The next day Dongshan came up to Yunmen and asked, "Yesterday you spared me sixty blows though I deserved them. I beg you, sir, where was I at fault?"
Yunmen said, "Oh, you ricebag! Have you been wandering about like that, now west of the river, now south of the lake?"[2]
At this, Dongshan had great realization.


At that time, if Yunmen had given Dongshan the essential food of Zen and awakened him to an active Zen spirit, his family gate would not have become so desolate.[3]
Dongshan struggled with himself in agony all through the night and at daybreak came to Yunmen again.
Yunmen gave him a further push to break through.[4]
Although Dongshan attained realization immediately, he still could not be called bright. Now I ask you, does Dongshan deserve sixty blows with the stick or not?
If you say he does, then all the trees, grasses, thickets, and groves should be beaten.
If you say he does not, then Yunmen is telling a lie.
If you grasp this clearly, you are breathing through one mouth with Dongshan.

[3] "...his school would not have become extinct" (Cleary); "Yunmen fed Dongshan good Zen food; if Dongshan could have digested it, Yunmen would have added another member to his family" (Senzaki).
[4] "All night, in the ocean of yes-and-no, Dongshan struggled to the ultimate. As soon as dawn broke, he went again to Yunmen, who explained everything in detail" (Aitken);
"One night Dongshan was in the ocean of right and wrong; the next morning he went again, and was given an explanation" (Cleary);
"All night long Dongshan wallowed in the sea of yes and no and he could get nowhere. He reached a complete impasse. And when at last dawn broke, he went back to Yunmen, and Yunmen gave him a picture book of Zen" (Low);
"In the evening, Dongshan was swimming in a sea of good and bad, but at dawn, Yunmen threw him a life preserver" (Senzaki);
"In the sea of yes-and-no, Dongshan struggled all through the night. When the day broke and he came to see the Master again, Yunmen helped him break through" (Shibayama).


The lion has a puzzling way of teaching its cubs:[5]
The cubs crouch, leap and spring back swiftly;
Unintentionally, he gave a checkmate again.
The first arrow was light, but the second went deep.[6]

[5]"It is said that three days after she gives birth to her cubs, a lioness will kick her beloved offspring from the precipice into an unfathomable valley. She cares for only those promising ones that scale the cliff, and deserts those that were not brave enough to do so" (Low).
[6] "The lion rejects her cub; she kicks it and dodges away; / the second arrow connected beyond causation; / the first was light, the last one deep" (Aitken);
"A lion teaches its cub the secret of the wanderling; / When it tries to leap forward, immediately it's flipped. / An unexpected second try gets right to the point; / The earlier arrow was still light, the later one went deep" (Cleary);
"The lion has a roundabout way of teaching her cubs: / Intending to urge them on she pushes them away. / Soon they redress themselves and charge back. / Heedlessly he came back to Yunmen but was checkmated; / The first arrow was only a scratch, but the second went deep" (Low);
"The lion had a secret to puzzle his cub; / The cub crouched, leaped, and dashed forward. / The second time, a casual move led to checkmate. / The first arrow was light, but the second went deep" (Sekida);
"The lioness teaches her cubs roughly: / When they jump up, she knocks them down! / Yunmen's first arrow barely touched Dongshan, But the second arrow went deep" (Senzaki);
"A lion trains its cubs this way; / If they walk ahead, it kicks them and quickly dodges. / Against his will, Dongshan had to be struck again; / The first arrow only nicked him, but the second went deep" (Shibayama).


Hold the universe still, and even Buddhas and Zen masters have no way to get in; throw open the rivers and seas, and fish and dragons get room to swim.


Traveler, you arrive, just passing through, and hear, "Where are you from?"
You state, then, the place name of your residence, if you have one,
Or of your last stop over. That's it: the complete from-ness of your being fully expressed.
What a profound truth you have uttered! What an inexecrable lie!