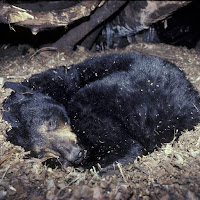 Wolverine began attending meetings on a fairly regular basis, joining the circle instead of holding herself outside.
One evening she asked, "If everything is essentially the same, how is it that winter follows fall, and spring follows winter?"
Raven said, "I defer to Porcupine."
Porcupine said, "I defer to Black Bear."
Wolverine said, "Black Bear? He's off snoozing until spring."
Porcupine said, "Well?"
Wolverine said nothing.