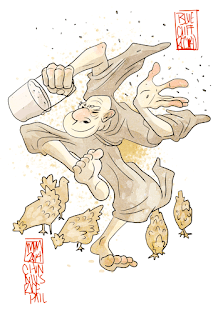 
The Bakuya sword in hand, he cuts through all complications.
The clear mirror hung high, he himself utters the words of Vairocana.
In self-mastery he quietly puts on his clothes and takes his meal.
In occult and playful samadhi, what will he do?
See the following.


At each meal, Master Jinniu himself would bring the rice bucket to the front of the Zen hall, dance there and laugh loudly, saying, "Dear Bodhisattvas, come and eat rice!"
(Xuedou said, "Although he behaved that way, he was not being kind.")
A monk asked Changqing, "An ancient worthy said, 'Dear Bodhisattvas, come and eat rice.' What does it mean?"
Changqing said, "That is exactly like praising and giving thanks to the rice."


From among the white clouds, laughter rings out;
Laughing aloud in the shadow of the white clouds,
He brings the rice himself to give to the monks.
Bringing it with both hands he gives it to others.
If golden-haired, they will follow him,
If they had been cubs of the golden lion,
Even thousands of miles away.
They'd have seen the warp three thousand miles away.


When Linji, after attaining enlightenment, was traveling about visiting Zen masters in various places, he came one day to Jinniu's temple. Jinniu, seeing Linji coming, sat in his room holding his stick crosswise. Linji struck the stick three times with his hand, then entered the monks' hall and sat down in the first seat. Jinniu came in, saw Linji, and said, "In an encounter between host and guest, each should observe the customary formalities. Where are you from? And why are you so rude?"
"What are you talking about, old priest?" answered Linji.
As Jinniu was about to open his mouth to reply, Linji struck him.
Jinniu pretended to fall down.
Linji hit him again.
Jinniu said, "Today things were not to my advantage."
At a later time, Guishan asked Yangshan, "In the case of these two venerable ones, was either the winner or loser?"
Yangshan said, "When one wins, one wins unconditionally. When one loses, one loses unconditionally."

And for more on Changqing's remark, see BCR93


Jinniu did this for twenty years. Where was his intent? Was he just summoning the others to eat? He always struck the wooden fish, beat the mealtime drum, and personally announced the meal. So what further need was there for him to take the rice pail and do so many tricks? Wasn't he crazy? Wasn't he "expounding by design"? If he was expounding this matter, why didn't he mount the jewel flower throne to "knock on the seat and hold up the whisk"? Why did he need to act like this?
As Bodhidharma clearly explained, he came here for the purpose of establishing a separate transmission outside the verbal teachings, to transmit individually the mind seal. Jinniu's expedient methods too were just to make you directly receive this. Twenty-four hours a day, the Ancients never gave up wanting to understand This Matter.
"Jinniu was not good-hearted" -- Since Jinniu descended into the weeds to help people, why did Xuedou say that he wasn't good-hearted? Why did he talk this way? You must have living potential to begin to understand this.
Changqing said, "Much like joyful praise on the occasion of a meal." The honored worthy Changqing was extremely compassionate. He leaked and tarried quite a bit. In truth it was "joyful praise on the occasion of a meal." But rejoicing over what?


Come eat, little bodhisattvas! Even if you have to sell your swords and saddles, you bodhisattvas, come and eat!
Xuedou remarked, "Even so, Jinniu was not being good-hearted." This remark is scary. In what respect is he not being good-hearted?
Changqing said, "Sure seems like celebration on the occasion of a meal." This saying is hard to believe and hard to understand. The vein of the words is so fine it's as though it had been sifted through a silk mesh. It is a life-taking spiritual talisman!


This has been called the giant meal table of the successors of Mazu. Perhaps so -- but there is no one on earth who does not sit at this table. Nevertheless, there is no one who really knows how to eat the food. Thus, no matter how fine a table of treats Jinniu has set out today, there seem to be no customers to partake of it. Yet he certainly is a genial host. When Zen masters act for the benefit of others this way, it is just because people don't know they know what they know and so seeking outwardly. Thus Jinniu had no choice but to dance and laugh for twenty years and tell people not to eat rice through their noses, showing them what they already knew. This was Jinniu's extremely kind help for others. When Xuedou remarks that he was "not being good-hearted," he means it is a fine tea party, but don't drink too much irresponsibly and get poisoned. It's important how you drink.
"Sure seems like celebration" -- Celebrating what? Is it because the meal is your favorite dish? No, it's a celebration to let you know the way to eat with your mouth.


Jinniu did not miss even one day dancing, laughing, and calling the monks to meal. It was wonderful. What was in his mind? Sometimes the Zen teacher has these peculiar ways, which he sticks to. Yunmen (864-949) asked his disciple Xianglin (908-87) every day, "What is this?" Jinniu gave something to others every moment. But what is the "it" that he gave?
"Although Jinniu did this, he was not simple-minded." Xuedou's remark is reminding you that Jinniu had a definite intention in behaving as he did, although he was as innocent as a baby.
"He seems to observe reflection and thanksgiving before the midday meal." At every mealtime the monks recite certain prescribed sutras, some reflective, some giving thanks.


It would seem that Jinniu was a man of great wealth, who had perhaps built and established the temple and was giving his whole life and wealth to the service of the temple and its resident monks. He was not the menial servant doing his chores. His name Jinniu (Gold Ox) is intended to be a hint of his wealth. Jinniu showed he was not attached to his own outer and worldly possessions. He rejoiced in giving and serving as much as, or even more than, people do when they receive and are served. His behavior is an example of utter detachment from self and from the world.


You are way off the mark if you see Jinniu as simply acting in a show of good-natured kindness. This is a crafty dish which he sets before the monks. There is poison in that rice.
Changqing and Jinniu were separated by sixty or seventy years. Changqing’s answer, though appearing very soft and mellow, is also quite strong.


This is certainly not your everyday monk! And he did this every day for twenty years! Most of us would be able to do it once or twice, but how many of us could continue this for twenty years? What is Jinniu doing? Is he very bright or just plain stupid?
“Although he did it like that, he was not being cordial.” Jinniu wasn’t putting on a show of kindness. He appears to be doing very silly things, but he has his sights set on stealing away all your cherished concepts. You’d better watch out if you don’t want to have all those concepts stolen away right before your eyes! Mere conceptualizing will not be of any use at such a time. It is only the fact itself which can cut away all the entangling vines of conceptualizing in our hearts. But what is the fact itself? The Zen collections are filled with examples. Here Jinniu dances out before us, rice bucket in his hands, laughing. There is just that fact with no reasoning attached to it whatsoever. It is enough if you can realize this directly on the spot. For Judi, it was holding up a single finger which cut off all concepts. For Linji and others, it was a slap in the face. As for Luzu, whenever anyone came to him for instruction, he would immediately turn around and face the wall in zazen. Shakyamuni often just sat still. In each of these instances, they were all directly revealing the fact and depriving their students of their concepts. You must realize the fact instantaneously. And what do you realize? You realize that it is totally empty. And with this realization, all your concepts are blown away.
Changqing said, “That was a sort of grace before meals.” First we recite the sutra on opening the bowls. Then we recite the Ten Names of the Buddha. When we eat our morning meal of rice gruel, we recite a sutra in thanks and joy upon receiving this food, and the same goes for the midday meal. Changqing was telling the monk that Jinniu’s action had no special meaning, that he was acting in the same spirit that we do when we recite the mealtime sutras. There are also records saying that the original meaning of the Chinese characters appearing here as “grace before meals” was that the monks were given meals as an offering from others who then accumulated merit for their action. The fact remains, however, that Kingyû’s action, strange as it might have seemed, was no more than an expression of thanks and joy upon receiving the meal. We could go so far as to say that even this feeling of “a grace before meals” was absent in Jinniu's action. He was just genuinely happy. You might think there must have been something up his sleeve to have been able to do this for twenty years. But, “if there is even a little bit of meaning, you cannot even save yourself.” Jinniu just did what he did because he couldn’t help doing it. Jinniu's actions are essential nature totally revealed. It is the real Jinniu who dances before us. He just had to do what he did, but he could never tell you why if you asked him. It’s just like a crab walking sideways. He wouldn’t be able to tell you why he walks sideways if you asked him. He just does it.

How can one stay where the spirits linger?
All seekers, come eat!
But take care --
butter turns quickly to poison.
Rice holds fast like a white cloud.
Think twice before you ask for this kind of food.


Every day, the same thing.
Every day, it's a fresh, spontaneous,
Gesture of total freedom.
Like a spouse to spouse saying, "I love you":
Deadly.

Illustration by Mark T Morse
Posted by Meredith Garmon at 17:19