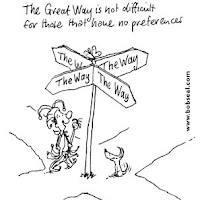 
Deep as the sea, high as the mountains!
Deep as an ocean, steady as a mountain;
The fly's attempt to face the gale!
A mosquito sports in a gale,
The ant trying to attack the pillar!
An ant tries to shake an iron pillar.
Choice and attachment! Non-choice and non-attachment!
A cloth-covered drum that reaches the eaves!
Discrimination, discrimination -- a cloth drum under the eaves.


No matter what Zhaozhou said, this monastic was planning to say that's still discrimination. "The supreme way has no difficulty, it just rejects discrimination." If you see yourself as ordinary and another as holy, you have not even dreamed of the living reality of the Zen teaching from which this statement derives. "In the heavens and on earth, only I alone am noble." There is no explanation. Is this discrimination? Is this nondiscrimination? It is what Buddha said when he was first born, but it should not be viewed literally. All the teachings of Budha's whole lifetime, and the essential issues of the Zen masters too, are all included in this one statement. The monastic takes the "I" of "only I" to mean the personal self, the self as contrasted with others. Zhaozhou is then unable to restrain his indignation, so one of his usual great sayings didn't come out. Even so, this is scary.


"The real Way is not difficult. It only abhors choice and attachment." Te sun shines brightly, the moon shines serenely. They give impartially. When clouds come, it is cloudy. When it rains, it is rainy. Every day is a good day. However, we introduce discrimination and differentiation, calling things good or bad. All evils stem from this practice, that is, from choice and attachment.
"What are non-choice and non-attachment?" We have consciousness, which is equipped with the eye to see itself. Being has succeeded in seeing (realizing) itself. That is enlightenment. Enlightenment is empty. It is non-preference, non-attachment.
"I alone am holy throughout heaven and earth." Enlightenment represents being itself. When you attain enlightenment, you realize you are being itself, and this exclamation, "I alone am holy," emerges naturally.
"It is still choice and attachment." Zhaozhou spoke from the point of view of transcendence. But this monk was still seeing things from the relative point of view, and to him Zhaozhou's words sounded discrimination. In fact, the monastic had thought up his quesiton with the intention of shutting up Zhaozhou, whatever answer he might make.
"You country bumpkin!" Zhaozhou usually spoke calmly but to the point. However, he did not hesitate to utter a forthright condemnation when it was called for.


"The Supreme Way is not difficult; it just dislikes picking and choosing." Picking and choosing means liking this in preference to that. I like tea better than coffee. I like him but I don't like her. As long as this kind of choosing according to one's whim is present, our basic peace of mind will be disturbed, that peace of mind which is like the bottom of the ocean where not a ripple disturbs the profound calm. The Supreme Way (i.e., our essential nature) is exactly like this; there is not a wave of disturbance in the essential world. But if picking and choosing should make their appearance, waves have already appeared on the surface of our consciousness and we lose our basic peace of mind.
"Above and below heaven there is only I." These were reportedly the words of the Buddha when he was born, and you can see images of the baby Buddha which show him pointing upward with one hand and downward with the other.
"Isn't that, however, picking and choosing?" No, it's not. But once you start to think about the meaning of Zhaozhou's words you're lost. That's choosing. Zhaozhou isn't dealing with concepts or meanings.The essential world is revealed totally in "Above and below heaven there is only I." There is no comparing between this and that. For example, when I say, "Ahh, that's nice!" it might seem like choosing, but actually in that moment there is just "Ahh!" (liking) in the whole universe and no room for dislike. Or, vice-versa, when I say, "Ugh, that's terrible?" there is just that "Ugh!" (dislike) and no room for liking. In addition to filling the entire universe, it is totally empty. "Ahh!" and "Ugh!" are totally void, they have no intrinsic substance. It is precisely because they are empty that they can become one with the entire universe. To feel regretful upon seeing the flowers fall and vexed upon seeing the weeds proliferate might seem like picking and choosing. But actually, it's not. When you say, "What a shame!" there is only that in the entire universe. When you say "Darn it!" there is only that in entire universe.


Don't Pick or Choose
The right path is easy.
Just don't pick or choose.
Mountains will crumble, rocks will fall
Deep as the ocean, firm as the earth.
A mosquito flies in the fiercest of winds.
An ant tries to uproot an iron pillar,
picking, choosing, no, do not decide --
A cloth drum hiding,
making no sound.
The boom disappears in the empty space.


"Alone, alone, all, all alone/ Alone on a wide, wide sea!"
The picking and choosing that picks nor chooses --
The alone that knows no aloneness --
The Great Way becomes you.