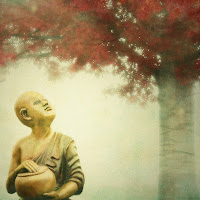 
Bodhidharma’s primary truth bewildered Emperor Wu.
Vimalakirti’s teaching of nonduality made Manjusri's speech excessive.
Is there anyone who goes into thorough realization or not?


Jingzhao Mihu had a monk ask Yangshan, “Do people these days need [or: have to attain] enlightenment or not?”
Yangshan said, “It is not that there is no enlightenment. Yet how can it be helped that it falls into the secondary class [or: into duality]?”
The monk went back to Mihu and told him about it.
Mihu deeply agreed [wholeheartedly approved it].


A monk asked Jingzhao Mihu, "Do the eminent sages since antiquity arrive at the real truth?"
Mihu said, "Yes."
The monk said, "If it's the real truth, how can it be arrived at?"
Mihu said, "At the time when Huo Guang [Western Han politician, d. 68 BCE] sold a phony silver city and gave the receipt to the chief of a foreign tribe, whose doing was this?"
The monk said, "I can only shut my mouth and say nothing."
Mihu said, "On even ground you make people help out."
He then sent the monk to ask Yangshan whether people these days need enlightenment.


Jingzhao Mihu then sent the monk to ask Dongshan, "What do you have to say about that?"
Dongshan said, "You have to turn around and ask him, then you can find out."
Mihu also agreed with this.


The second level divides enlightenment and rends delusion.
The secondary -- distinguishing enlightenment, breaking up delusion:
Better to promptly let go and discard traps and snares.
Quickly you should free your hands and relinquish net and trap.
Merit, if not yet extinguished, becomes an extra appendage.
Accomplishment, before it's exhausted, becomes an extra thumb:
It is as difficult to know wisdom as to bite one's navel.
Wisdom can hardly know, like you can't bite your own navel.
The waning moon's icy disk, autumn dew weeps.
The full moon's icy disk weeps in the autumn dew:
Benumbed birds, jeweled trees, dawn's breeze chills.
Birds are cold in the jade tree, the dawn breeze is chill.
Bringing it out, great Yangshan discerns true and false.
Brought forth, great Yangshan distinguishes real and false:
Completely without flaw, the splendid jewel is priceless.
Completely without flaw, the white jade is esteemed.

Another Anecdote about Jingzhao Mihu


When Mihu resided at Jingzhao, an old worthy asked him, "Nowadays if people see a piece of broken well rope in the light of the moon they say it's a snake. I'd like to know what you would call it if you saw a buddha?"
Mihu said, "If there's a buddha to be seen, it's not other than all beings."
The old monk said, "A thousand years of peach pits."


Even though Yangshan was right in speaking this way, still can he avoid falling himself? If he can avoid it, there's still one who very much disagrees. If he can't avoid it, he also falls into the secondary. Although Mihu approved it, did he himself have a way to emerge? People try to examine and see. If you can find it out, for both men the tiles crumble and the ice melts. If you can't find it out, don't be hasty now.


Atop the green peak he questions the man;
Pointing out where the mountains end, he doesn't let him settle his body.
Even though able to avoid the observance of autumn,
How can that compare to the spiritual sprouts not invading spring?


Fundamentally there is no delusion or enlightenment.


We easily discern true and partial in the enlightenment of people today.
These are traces of the self before the empty kalpa.
Although carelessly making mistake after mistake,
In the intimate entrustment from west to east they fully meet.


The theme of this koan is one of the most important themes in Zen: do not dwell in any fixed place. "How can one not fall down into the second level?" Don't hold onto anything. Just let go.
If you say you're enlightened, you've already fallen into the second level since words can't reach it. If you say you're not enlightened, you've fallen into the second level because you deny the Buddha's teaching. Is there a first level? If you say there is, you fall into the second one. And if you avoid the question entirely, you also fall.
You have some ideas about enlightenment, some kind of a notion, maybe it's not even fully formed -- but whatever it is, it's not this life, not this suffering, not this reality. It's something else.
As long as you believe there's enlightenment, then there's delusion


In order to achieve true peace of mind, is it necessary to borrow such a means as satori? And: Is there really such a thing as satori among people?
All beings are intrinsically enlightened. But if you then assume that it is not necessary to do anything, that is mistaken. There is definitely the matter of realizing it experientially and thus confirming it as a fact for yourself. Hence: “although there is there isn’t, although there isn’t there is.”
How can it be helped that it falls into the secondary class? This could be seen as the main point in this koan. Even though we realize satori, concepts remain, which are known as the “form of satori.” Traces of satori are remaining. This is what is meant by “falling into the secondary class.” You remain sticking to that experience of satori.
There are many gradations of satori when it comes to the clarity and intensity of that experience. When you reach the stage of returning to your original, unadorned self (moto no mokuami), even satori disappears, in the sense that there is no consciousness of being enlightened. When you stand, there is just standing. When you sit, there is just sitting.
Dôgen Zenji says that, although we are intrinsically enlightened, there is not a single person who is aware of that from birth. Thus, we must by all means practice. Why? Because we are deluded from birth, we must break through that illusion in enlightenment. Then the satori itself becomes delusion. This is what is meant by falling into the second level, which can’t be helped. Dogen states unequivocally that even the second level is satori. This is truly wonderful. He is presenting a sharp affirmation toward this problem, whether we are talking about a second level or a
thousandth level.


Mihu's "Enlightenment or Not?"
Thinking there is enlightenment – it is needed,
Desperately.
Here, between things
Even a bird flying high in full view would fail to find it.
Would the moon still be reflected in that dewdrop?
BIRD BEWARE.

The adept and the inept --
Two tadpoles swimming
in the same pond.
When winter arrives
and ice forms
like white jade
I can't help but wonder
where the frogs have gone.


"Second class enlightenment"?
It is the way of my house to speak thus,
Goosing one another to notice conceptualizing
And serve the greens fresh
As befits a house of the homeless.