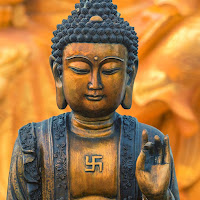 
It is like trying to draw emptiness.
The moment you start to use the brush, you go wrong.
How is it possible to bring forth the pattern, or make a model?
I have already revealed the stopper.
If there are rules, make avail of them;
If there are no rules, use the [following] example.


A monk asked Yangshan, “Your Reverence, do you know letters or not?”
Yangshan said, “As befits my portion." [i.e., "so-so," or "to the extent that's required."]
The monk immediately turned around once clockwise and said, “What letter is this?”
Yangshan drew the ideograph for “10” [ 十 ] in the earth.
The monk turned himself around once counter-clockwise and said, “What letter is that?”
Yangshan modified the sign “ 十” into a swastika [ 卍 ] [an ancient religious icon used in the Indian subcontinent, East Asia and Southeast Asia, where it has been and remains a sacred symbol of spiritual principles in Buddhism, Hinduism, and Jainism; here a symbol of Buddhism].
The monk drew a circle in the air and lifted his two palms like Asura [originally a Hindu deity; here one of the eight supernatural protectors of Buddhist Way] vigorously holding the sun and moon and said, “What letter is that?”
Yangshan immediately drew a circle enclosing the swastika.
The monk at once represented the vigor of a Rucika. [The buddha Rucika wailed at his fate at first because he was the last of the thousand buddhas in this cosmic period. But then he made up his mind to be the energetic protector of the Dharma for all other buddhas. Two powerful figures of this buddha are seen at the entrance gate of many temples in Japan.]
Yangshan said, “Good, good. Keep it with care.”


The void inside the ring of the Way is never filled;
The void of the circle of the Way is never filled,
the character for the seal of emptiness has never been revealed.
The letters on the seal of emptiness are still unformed.
Marvelously orbiting the wheel of heaven and axis of earth,
Subtly carrying the globe of heaven and axis of earth,
mysteriously stringing together military warp and literary woof.
Finely weaving the military warp and cultural woof,
Releasing, opening, kneading, gathering;
Opening up, kneading together,
standing alone, going anywhere.
Standing alone traveling everywhere:
Activity send forth the mysterious gist, and sparks lightning in the blue heaven;
The mind activates the mysterious pivot, thunder roars in the clear blue sky;
the eye enfolds the purple rays, and sees stars in the bright of day.
The eye takes in violet light, seeing stars in broad daylight.


Before the birth of father and mother,
One solid circle;
Even Shakyamuni didn't understand it --
How could Kasyapa transmit it?


Yangshan said, "Right, so it is. This is what all Buddhas attend to. You are thus, and I am thus; keep and maintain it well. Very good indeed. You'd better go now."
After the monk bowed in thanks, he sprang into the air and departed.
At that time there was a wayfarer who saw this, and after five days came to ask Yangshan about it.
Yangshan said, "Did you see?"
The man said, "I actually saw him go out the gate and take off into the air."
Yangshan said, "That was a saint from the West who came for the purpose of investigating my way."
The wayfarer say, "Although I have seen various meditation states, I don't understand the principle of that."

Some Background Tales from Wansong


The use of circular symbols has come to be called the family style of the Gui-Yang school of Chan. The tradition of the Gui-Yang school says that National Teacher Nanyang Huizhong (675-775) transmitted to his disciple Danyuan ninety-seven circular symbols of the Sixth Patriarch.
The National Teacher told Danyuan, "Thirty years after my death there will be a novice in the South who will cause this path to flourish greatly when he arrives."
Later, Danyuan met Yangshan and said, "As I carefully examine this prophecy, I realize it refers to you." [Note: Yangshan was born 32 years after Huizhong's death. While Yangshan did become a novice at a young age, he would not have been a novice until at least 45 years after Huizhong's death.]
After Yangshan had gotten the symbols, he burned them up.
One day Danyuan said to him, "the circular symbols which I transmitted to you before should be kept deeply hidden."
Yangshan said, "I have already burned them."
Danyuan said, "That's all right for you, but what about those yet to come?"
Yangshan said, "If you want, I'll recompile the book." Then Yangshan recompiled the book of symbols and showed to Danyuan -- there was not a single error or omission.

One day Danyuan went up into the hall, and Yangshan came forth from the assembly, made a circle, and offered it up in his hands; then he stood there with his hands clasped at this chest.
Danyuan interlocked his fists and showed this to him.
Yangshan advanced three steps and curtsied; Danyuan nodded, and Yangshan bowed.
Among the ninety-seven kinds of symbols, the clasped hands is called the rakshasa samadhi; the curtsy is called the woman samadhi. These are all manifestations of the universal gate which flows forth from the samadhi which is king of samadhis.

There was an Indian monk who came to call on Yangshan. Yangshan drew a half-moon on the ground.
The monk came nearer and added to it, making a full circle; then he erased it with his foot.
Yangshan extended both hands.
The monk immediately left, saying, "I came to China to pay respects to Manjusri, but instead met a little Shakyamuni."

A monk came and bowed. Yangshan paid no attention to him. The monk said, "Master, do you know written characters?"
Yangshan said, "Enough."
the monk drew a circle and presented it.
Yangshan erased it with his sleeve.
the monk also drew a half-moon sign and presented it.
Yangshan made a gesture of throwing it behind him with both hands.
The monk looked directly at him.
Yangshan lowered his head.
The monk walked around the master once, whereupon Yangshan hit him.
The monk finally left.


The Fourteenth Patriarch Nagarjuna concealed his body on the teaching seat and manifested a circular form. Kanadeva said, "This is the Venerable One showing us the form of the body of a buddha." Thus, the form of signless meditation is like the full moon; the meaning of buddha-nature is vast emptiness and illumination -- but these are only metaphors. Right in the beginning, as soon as he asked "Do you know characters?" I'd say, "I've always been illiterate," to see what he would do.


The empty circle represents the dwelling place of the body of the Buddha. The swastika denotes working for others with expedient means arising from true wisdom. Realize that the Buddha and sentient beings are not different and then put that wisdom into practice. The problem is that we dwell in our thoughts, ideas, symbols, and images. We don't realize that we dwell in the land of the Buddha: that's the land of the unborn and the undying, that manifests as being born and dying. This is not a symbol, but your life as it is.
When the monk posed as Asura, representing the world of desires, Yangshan enclosed the swastika in a circle. This circle contains everything, including the Buddha and awakened activity. It is so large that it even contains itself. Everything is in balance and harmony. Finally, the monk posed as Rucika, a fierce temple guardian representing keeping and maintaining the Dharma, so Yangshan replies, "Just so! Keep and maintain it well."
The Gui-Yang school (of which Yangshan was a co-founder) is known for its use of mystical symbols. You cannot, however, hold onto explanations of symbol meanings to penetrate this koan.


Each movement we make — lifting a leg, raising a hand — is essential nature itself. All koans are trying to somehow make us aware of this world of emptiness. But they have no resort but to bring up something from the phenomenal world. This present koan has several interesting examples of that.
The monk immediately turned around once clockwise and said, “What letter is this?” Here is an example of “the acrobatics of emptiness.” The content is empty but there is totally free activity. In writing the ideograph for “10,” which is a cross whose axes can be extended out endlessly, Yangshan expresses how our true nature fills the entire universe. This “10” [十] is the thing itself. You can also see it as expressing the activity of the phenomenal world.
At the next question, Yangshan modifies 十 into 卍. This, too, expresses the activity of the universe.
The monk drew a circle in the air and lifted his two palms like Asura vigorously holding the sun and moon and said, “What letter is that?” An Asura in Buddhism is a deity that is subject to such passions as anger. When the monk draws a circle in the air, he is expressing the world of emptiness for the first time. Yangshan draws a circle enclosing the swastika. This expresses phenomena within emptiness; it is great activity that fills the entire universe.
He represented the vigor of a Rucika:  he took on the pose of one of the guardian deities at the gate of the temple.

the symbols have all been thoroughly corrupted
throughout history

“Relax!” cries the Racika
surely Vernon needed nothing more than to have his hair braided
in this class
at this time


First, the myriad things. Then, the practice.
Third, the empty oneness. Then, guarding the dharma.
Yangshan and company put on a flashy show,
But there's really nothing to it.