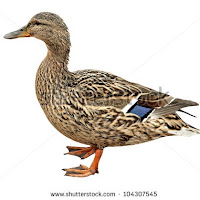 Mallard is back with us today. It's her third appearance. The first was in #27 when she asked, "Aren't we wasting time just sitting here while the Blue Planet goes to hell?" The second was just eight episodes ago, in #61, when she had a question about the vow to save the many beings.

Being a migratory bird has some challenges.

The spiritual path has both solitary and communal elements -- and neither may be neglected. It's important and invaluable to have a solid, supportive group of "friends along the path" who gather to do spiritual practice together. Mallard has her flock, of course, but for her, it's the Tallspruce gang, not her flock, that is her spiritual community. (She's a bit of an odd duck.) Can trees and stones be your spiritual community? They're part of it -- and the spiritual path is one of a deepening sense of community with all beings, sentient and insentient. Especially at first, though, you need beings to talk to, that talk back to you and speak your language. Grandma, perhaps, may find it more fun to abjure spiritual community (as we saw last episode in #68), but that's because she has a certain temperament and has reached a certain stage that she would never have reached without having trained with a community for many years.


Mallard spoke up first at an evening meeting and said, "When I'm traveling, I find it difficult to do zazen without support from the community. As often as not, I end up not doing it."
Raven said, "Sit with the stones."

Posted by Meredith Garmon at 16:17