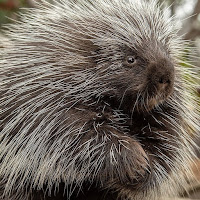 Three Refuges:
Three Pure Precepts:
Ten Grave Precepts:
Zen has these precepts, and others (e.g. "The Four Bodhisattva Vows"). A precept is:


"1. a commandment or direction given as a rule of action or conduct. 2. an injunction as to moral conduct; maxim. 3. a procedural directive or rule, as for the performance of some technical operation" (Random House Unabridged Dictionary).

So Zen's precepts articulate the moral component of Zen.

A moral component isn't the same as a moral basis. The basis of Zen is direct experience of oneness, nonseparation, and impermanence. Precepts are upaya ("skillful means") -- tools for our practice.

Some questions for exploring the case below:
1. When Porcupine says, "empty," do you interpret him as agreeing with Raven (that Zen is empty of any moral basis)? Or is he disagreeing with Raven's answer, calling it empty?
2. Relatedly, if Magpie wouldn't say, "empty," do you think that's because Magpie believes Zen does have a moral basis? Or, rather, would it be because Magpie wouldn't see Raven's "none whatsoever" as empty?


Porcupine came by for another special meeting with Raven and asked, "Does Zen have a moral basis?"
Raven said, "None whatsoever."
Porcupine exclaimed, "Empty! Empty!"
Raven said, "That's not what Magpie would say."
Porcupine bowed down and touched his face to the ground.
Raven asked, "Why do you bow?"
Porcupine said, "Magpie is bowing."
Raven put her beak to his ear and said, "See me after the talk tonight."


The mountain pass is unexpectedly steep and icy.
Or maybe the car keys aren't where I was sure I left them.
Certain people are such blind fools.
The demands of the day surpass reasonableness.
This is me, bowing --
Bowing gratefully to the difficulty.