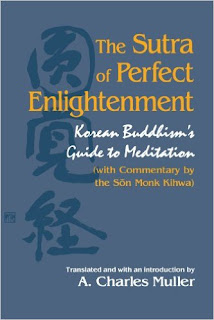 
The Sutra of Perfect Enlightenment or Complete Enlightenment (Chinese: Yuánjué jīng; Japanese: Engaku-kyo) is a Mahāyāna Buddhist sūtra highly esteemed by both the Huayan and Zen schools. The sutra is divided into twelve chapters as a series of discussions on meditation practice. It deals with issues such as the meaning and origin of ignorance, sudden and gradual enlightenment, original Buddhahood. It was intended to resolve questions regarding doctrine and meditation for the earliest practitioners of the Chan school. It is traditionally attributed to Buddhatrāta, an Indian or Kashmiri monk otherwise unattested in history, who translated the work from Sanskrit in 693. Some scholars, however, believe it to be Chinese in origin and written in the late 7th or early 8th century CE. It is considered a creative reformulation that assembles the teaching from the Shurangama Sutra and Awakening of Faith. (adapted from Wikipedia)


A manifest koan depends solely on right now. The absolute manner distinguishes only itself. If you try to set up gradations or intentionally strive, then all of this is painting eyebrows on chaos, or attaching a handle to a bowl. So how is tranquility achieved?


Sublime magnificent, courageous, magnanimous;
Magnificent, clearly outstanding;
Serene, at ease.
piercing your head in bustling places;
Clamor pierces the head;
walking along in tranquil places;
Quiet is where to tread.
Underfoot, string cut away -- I'm perfectly free.
Underfoot, the thread breaks, and I am free:
Stop cutting. The mud's gone from the nose.
The spot of mud on the nose is gone -- you don't have to chop.
Don't be disturbed.
'Don't budge' --
A prescription on a thousand-year-old paper.
On a thousand-year-old scrap of paper medicine's compounded.


"Be at all times without deluded thoughts arising." Deluded thoughts are the same thing as dichotomous thoughts, dualistic thoughts. You're separating yourself not only from everything else, but also from yourself. Any time a deluded thought arises, don't grab it. Just observe it and let it pass. The sad truth is there's no such thing as a peaceful mind! As long as you cling to "mind," then you're stuck. No-mind is what's peaceful. Since avoiding deluded states of mind is not always possible:
"With regard to deluded states of mind, do not try to extinguish them." Let them follow their own course. Don't grab onto them. But if you do grab onto them:
"Dwelling in the realm of delusion, do not add discriminating knowledge." Grabbing onto them, evaluating them as to whether they're good or bad, real or unreal, true or false -- you're adding needless interpretation. Thoughts arise. Yet if you don't cling to thoughts, at moments there are no thoughts arising. Without thoughts, who are you? We fall into the realm of delusion when we are caught up in our heads, when we use our minds to foster our own self-image. This is like adding frost on top of snow.
"When knowledge is absent, do not distinguish reality." Don't get stuck anywhere. When knowledge is absent, you can't get stuck anywhere because it is most intimate. Just keep putting your thoughts into the oven of your zazen. You'll consume it all. Just do it over and over and over again.


“At all times, you do not raise the delusive mind.” “Delusive mind” is feelings and thoughts that arise from a feeling of dualistic opposition. Actually, it is one. But then subject and object arise, ideas of self and other, like and dislike. Even though we are told not to raise the delusive mind, we end up doing it anyway.
"When there are all kinds of illusory thoughts, you do not extinguish them." If you try to stop them, you become unnatural. No matter what thoughts arise during zazen, they are neither positive nor negative. Don't worry about them. Do not to try to dispel the thoughts but simply let them be.
"Dwelling in the delusory state of mind, you do not add understanding" There are various thoughts and feelings, such as like or dislike, desire or feeling tired. And then we tend to think about those feelings and judge them to try to understand them. We are constantly observing the movements of our own minds. It is as if there were a second self constantly observing what we are doing. Human consciousness is a wondrous thing, capable of endless introspection. You introspect on your present self and then you introspect on that introspecting self. It is like two mirrors facing each other.
"Where there is no understanding, you do not distinguish the truth." Let’s say
that judging, discriminating mind comes completely to rest. Then you are told “not to distinguish the truth.” In other words, do not say, “oh, this is it!” That, too, is the false way. The sutra says that all such attempts are no good. This is quite difficult advice to carry out. You must realize that you are always right in the middle of heaven. Then no trying is required any more, and you become truly free.


Four Sections of the Enlightenment Scripture

Wanna Make Somethin’ Of It?

The most generous host
Locks no doors
Serve her guests no tea
Corrects no faux pas
Offers no more
than a smile.

Painting eyebrows on chaos,
giving emptiness
a little dab of rouge --
at the bewitching hour
a skeleton descends
the long staircase
her glass handbag
filled with fishhooks.